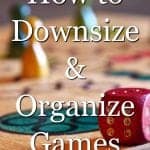 Whether you’re short on space or simply looking to declutter your home, a great place to start is to organize and downsize toys and games. That’s just what we did when we moved from one small space to another. Here’s how we did it (and how you can do it too!) 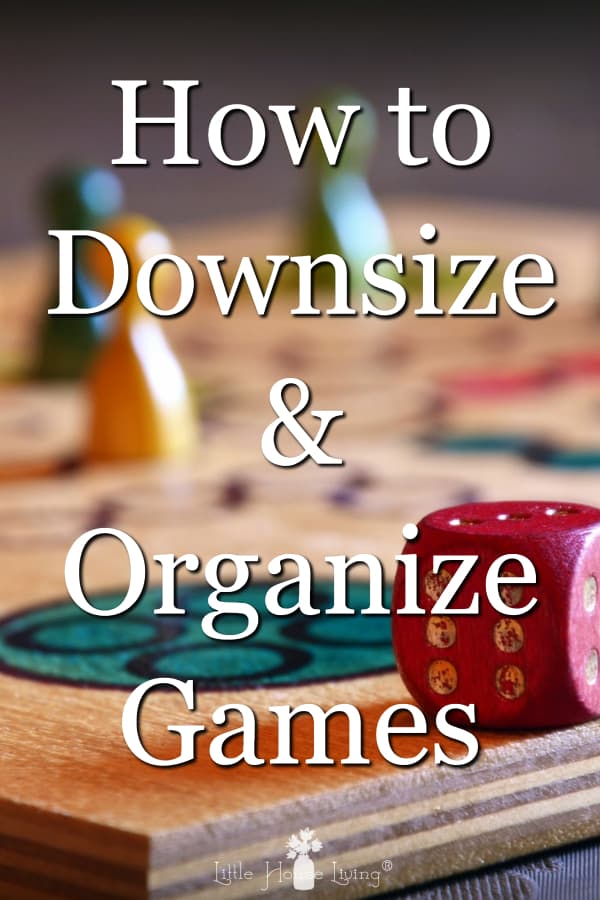 How to Downsize Games

I’ve done a few things to downsize that might seem a little crazy at first glance, but  I’ve never looked back or regretted any of it. Even now, many years after I originally published this post, I’m still happy with the changes we made. Today I’m going to share a few of the things that we’ve done to organize and downsize our possessions in order to fit comfortably into a relatively small space.

One of the big reasons we had to downsize our stuff was not just due to lack of space overall, but due to lack of storage space in particular. You see, moving into a house with no closets takes a lot of forethought. Where do you store things?

Well, for the most part you don’t. You keep what you use and if it’s something you really need you find the space for it. Here are 3 areas of the house that we’ve worked on and downsized considerably. 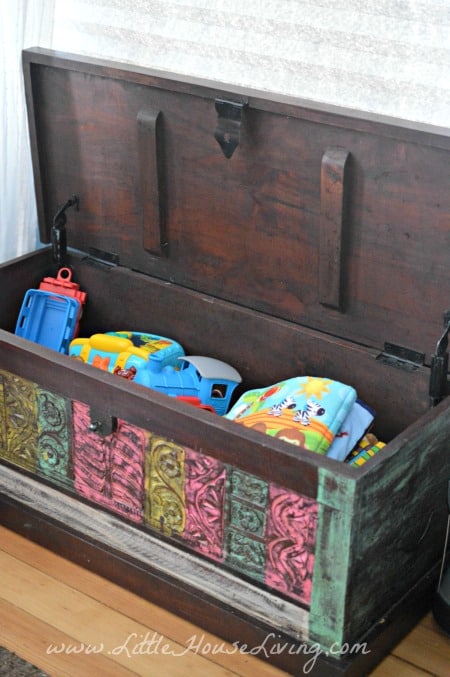 How to Downsize Toys

If you’re limited on space (or even if you’re not and you’re just trying to declutter), it’s so important to regularly go through your kids’ toys and get rid of any that they’ve outgrown or don’t play with. If you’re not careful, those toys always seem to creep from one room into another until soon they’ve taken over your entire house! Downsizing and decluttering toys once every few months can help to make sure they never get completely out of control.

We still seemed to have quite a few toys in the camper and every so often I would put a few away in a box for a while. But I quickly came to realize that our little guy didn’t even miss them. So slowly, but surely, we started to get rid of the toys.

We now have one toy box for both of our kids. All of their toys can fit in here with the exception of the train set and the building blocks.

We also made a promise that any more toys brought into our house would only be allowed to come in if they were something worthy. For us, that means something that will last a long time and something they can play with for a long time.

Very few plastic toys fit this description for us and we prefer wooden toys. We’ve talked to our friends and family about gift giving and prefer that the kids get an “experience” gift or something for crafts instead.

By doing these things we’ve noticed the kids have less anxiety over toys and actually play better than when they had more toys to choose from. Of course, we also like to play outside often, and for them, that’s better than toys any day! 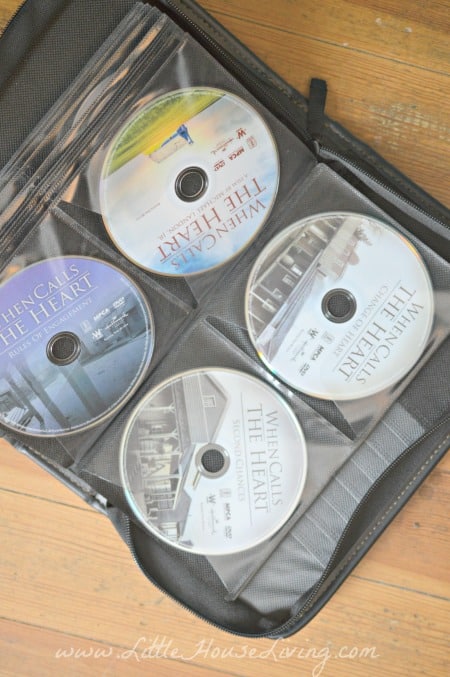 How to Downsize Movies

We do love to watch a good family movie, especially in the winter to pass some of the long, cold days. I actually moved all of our movies in the camper and realized how much space the boxes were taking up. So I bought a few of these dvd cases, took all of the dvds out of the plastic cases, and put them in those.

I cleaned out at least two large black garbage bags full of dvd cases just because they take up so much space! Now all of our movies can be easily found and we don’t miss the cases at all.

Aside from simply reorganizing DVDs into one large DVD case, take the time to go through and get rid of any movies you know you’ll probably never watch again. Sometimes we buy movies when we should really just rent them, maybe because they’re on sale for a good price or because we think we’ll like them more than we do. There’s no point hanging onto these movies and having them take up valuable space, especially in a small home.

Nowadays, with on-demand movie services like Netflix and Amazon Prime, you hardly need to have any physical copies of movies laying around anymore. But it’s always nice to have your favorites on hand., just so long as they’re well organized and not taking up valuable square footage! 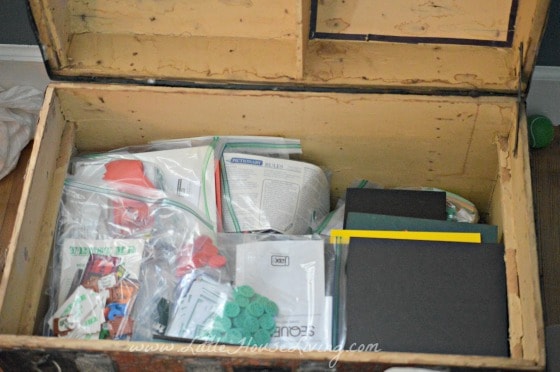 This was the single biggest “space-taker-upper” that we still had! We love board games and have a pretty good collection (we got many as wedding gifts!). But those boxes are huge and take up so much space! Now bear with me here…this is the one that my hubby thought I was crazy for wanting to downsize. (Although now he’s glad I did it.)

I took each game out of its box and placed the playing pieces in a large gallon size freezer bag and labeled it with the game name. Then I took all the game boards and made a stack. We cleaned out all of the boxes and un-needed plastic parts and put all of the game boards and pieces in a large trunk that we have in the living room. I kid you not, I took away at least 10 large black garbage bags of game boxes and plastic fillers. So much unnecessary space being taken up! And just like with the DVD cases, we don’t miss the boxes for the games at all.

Update…..after many years of keeping our game pieces in the zippered bags, we’ve finally upgraded! I’m now using these simple storage boxes to put the larger game pieces in. The boards are stacked inside our chest and then pieces and cards are placed into the boxes shown above. I LOVE these so much more than the bags or the original boxes because:

Downsizing just these three things cleared out a huge amount of extra space for us, and I bet just starting with these three areas can do the same for you. Then you can move onto other areas like kitchen gadgets, toiletries, books and knick knacks.

In our bigger house I would have never considered doing these things, but out of necessity we’ve done them now and I’m so happy that we did.

For more help with organizing, decluttering and downsizing, check out the following posts:

How to Get Organized On A Budget

How to Organize Small Spaces

Simple Ways to Declutter and Organize the Bathroom

How to Declutter Sentimental Items

Which areas of your house could you work on to create more space? What are some other “extreme downsizing” ideas that you have for making more space? Let me know in the comments!

This blog post on How to Organize Downsize Toys and Games was originally published on Little House Living in January 2015. It has been updated as of January 2021.