You are here: Home / Recipes / Freezer Recipes / How to Make 15 Meals in an Afternoon with Large Batch Cooking 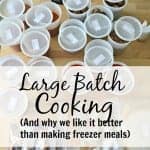 It’s been a while since I’ve done some large batch cooking for freezer meals but it was time for me to get into it again. Life has been busier than ever lately and any time that I can save preparing our meals on the busy days would be a life saver.

We prefer large batch cooking over making traditional freezer meals. Is there a difference? Yes… 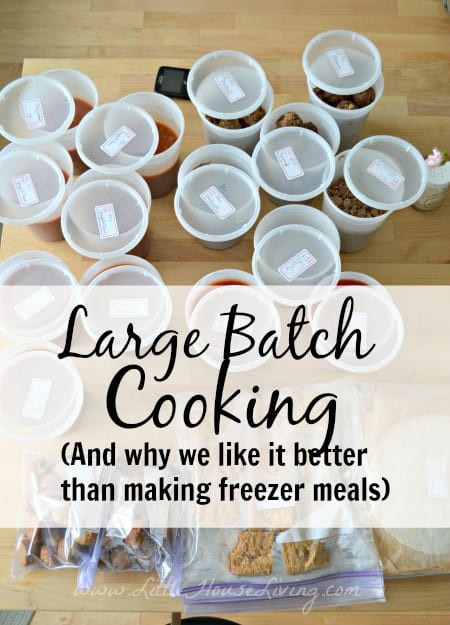 Traditional Freezer Meals generally consist of an entire meal put together in some kind of freezer container (usually a freezer zippered bag or a tin foil pan). It’s usually a complete meal all in one and all you need to do is stick it in the oven or in the slow cooker on the day that your family plans to eat it. Once it’s made you typically have very little to do to finish the meal. We’ve found that this type of meal is very useful if you are able to eat the majority of foods (and have few restrictions such as allergies) and if you have a large chunk of time to prep the meals for the freezer.

The big difference between Large Batch Cooking and Freezer Meals is that the meals aren’t complete. The foods are large parts of a meal but usually don’t consist of the entire meal all in one. The foods are full prepared so they simply will need to be re-heated or added to the rest of the meal to make it complete. Large Batch Cooking generally takes less time than making freezer meals because you usually make a large amount of whatever you are already cooking and just put away the excess for a future meal or meals.

So now that we’ve got the description out of the way. Let me share with you some tips about large batch cooking and why it works so well for us! 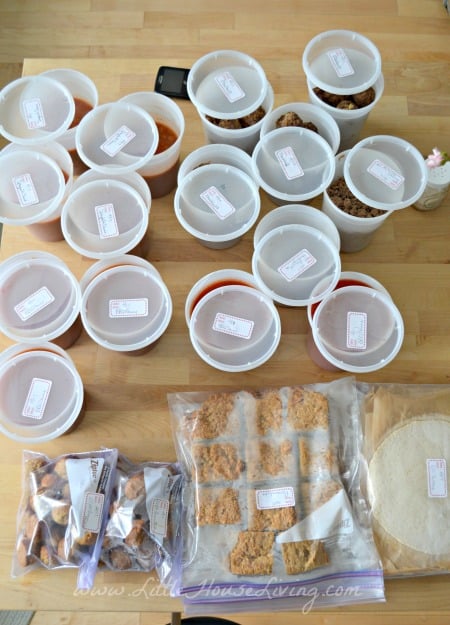 Here’s a picture from my latest round of large batch cooking. Instead of just making extras of one meal I was making two and also trying to get a little baking done while my oven was on, but I still ended up with the base for 15 meals (plus some snacks) with a little extra work. I used these Extreme Freezer Containers from Amazon. They fit 32 ounces (they do have other sizes as well that I hope to get at some point!) and are BPA free. I also purchased these Freezer Labels from Amazon because I’ve had trouble with other labels sticking. I’ve been very happy with both products! 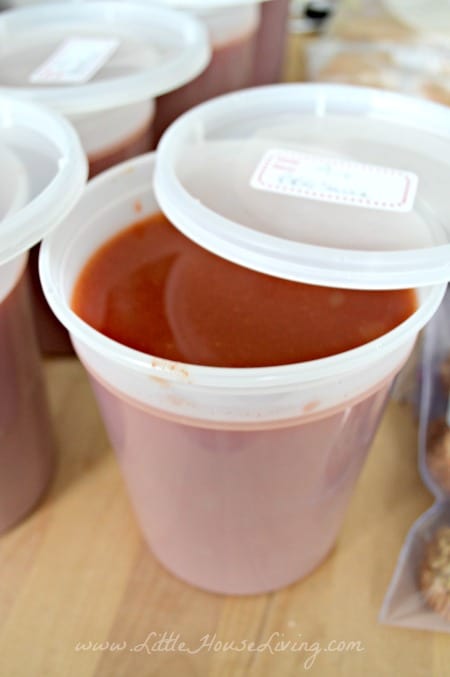 I started my large batch cooking session by simmering a large batch of homemade BBQ Sauce which we use with our BBQ Meatballs recipe. I ended up with 5 containers of this which was perfect since I got 4 containers of meatballs which will make 4 meals so I have a spare one that we can use for BBQ Chicken or something similar. 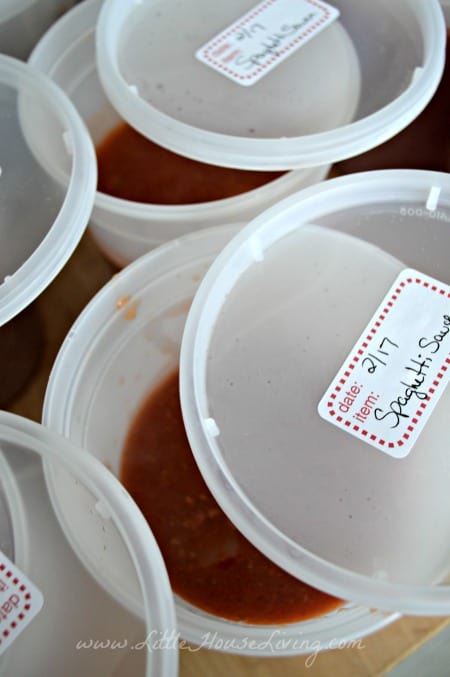 I was also making some spaghetti meat sauce. First I browned four pounds of hamburger. Then I drained it and removed 2 pounds (and split that between 2 containers), the remaining 2 pounds I put back in the pan and made spaghetti sauce with. I ended up with 4 containers (or 4 meals) worth of spaghetti sauce that’s ready to go. I will just need to heat it up on the stove or in the slow cooker and serve with pasta and veggies. The 2 containers of hamburger I will use as the base for other meals such as tacos. 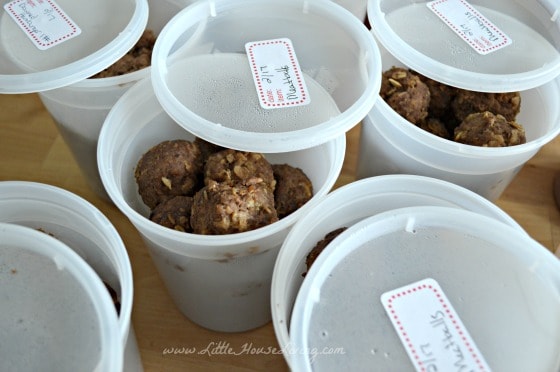 In the oven I made up a large batch (using 4 pounds of beef) of my Make Ahead Meatballs. Along with the BBQ Sauce this will make us 4 meals for the stovetop or slow cooker. 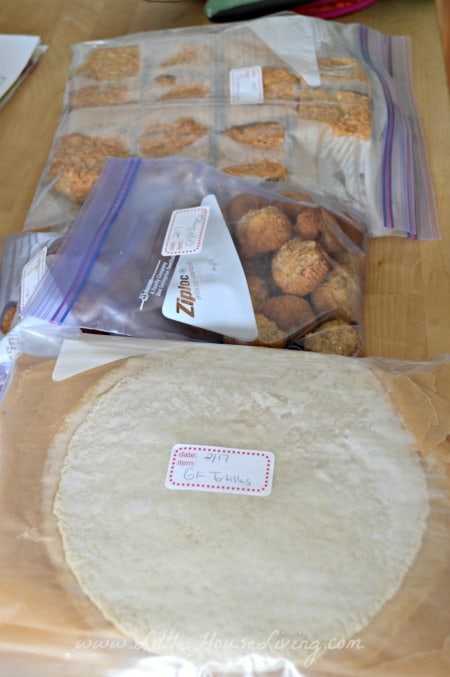 Since I had the oven on for the meatballs I decided to make full use of it and I whipped up a batch of Banana Bread Mini Muffins for a little snack and some Banana Cake for a treat. I also made a big batch of my new Gluten Free Homemade Tortillas Recipe while everything was baking, enough for at least 4 meals.

I made enough food for my family to have for supper plus: 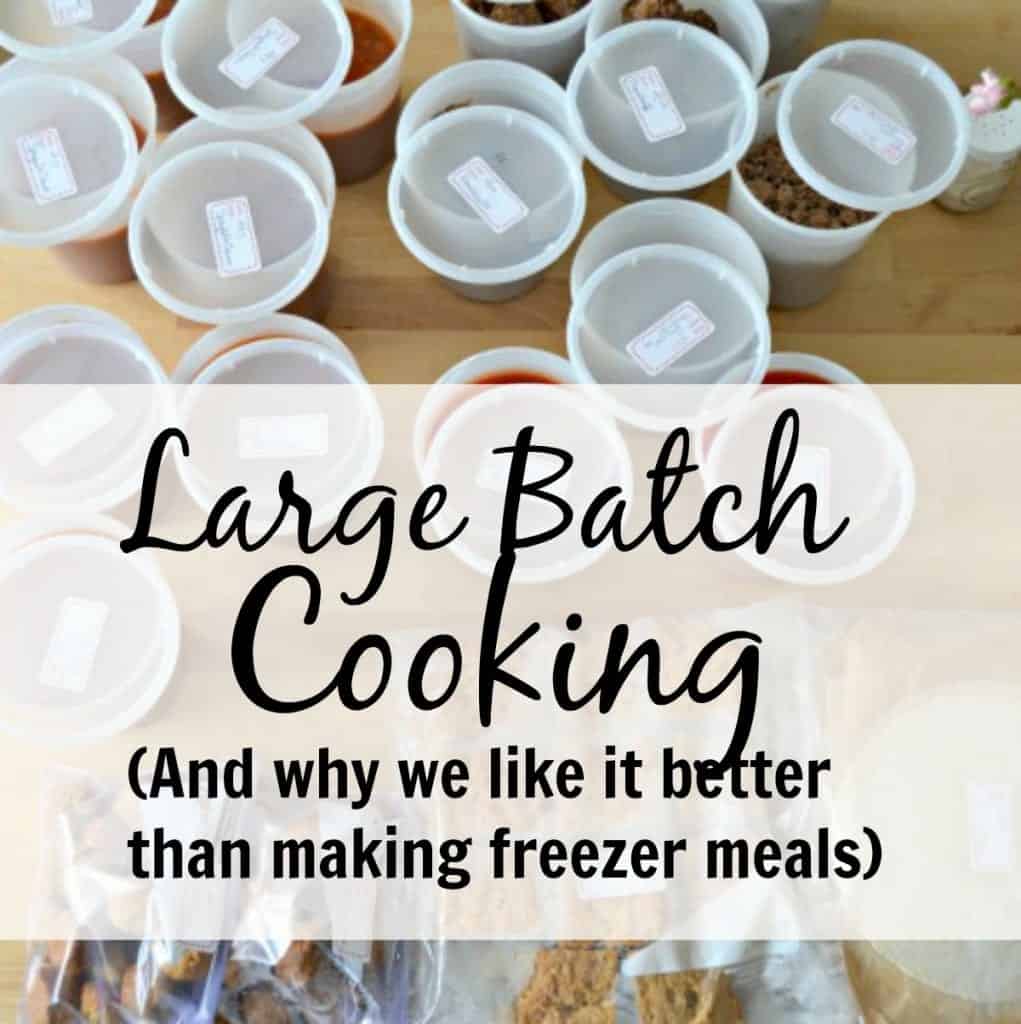 Of course, these aren’t complete meals but that’s why we like large batch cooking! We prefer fresh produce with our meals so cooking this way leaves us open to create the meals we want, based on what I have on hand. For example, I can make the BBQ Meatballs as the base for supper and pair with a nice salad if I have lettuce on hand, or if I don’t we might fry up some green beans with onions. Whatever we do, the hardest part of the meal that takes the longest (the meatballs) are already ready for us.

Since my kids and I can’t have gluten, dairy, and eggs, making traditional freezer meals is hard for us since most of them depend heavily on pasta, cheese, cream-of soups, and other similar ingredients. Large Batch Cooking allows us to make what we already make…just more of it at a time.

Large Batch Cooking is something I will do once a week when I get back into it again, that way there are always a few extra meal bases in the freezer. Obviously all of the meals I made on this day are similar so we will probably only eat 1 to 2 of them a week which means I have another 2 months before I need to make any of these meals again. 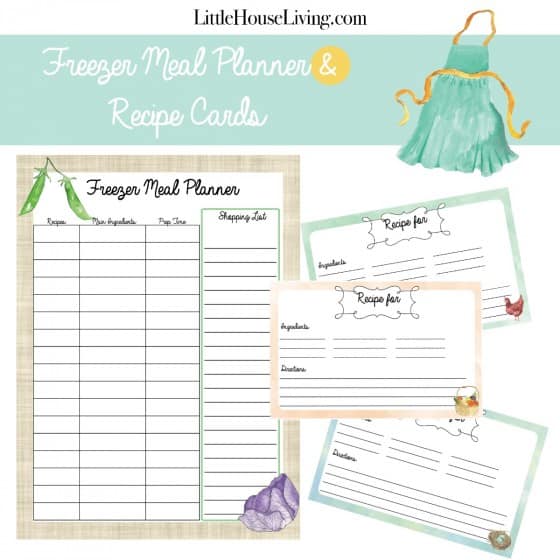 Want to get into Large Batch Cooking? You will need to plan ahead so that you have enough food to make your meal and to make your freezer meals as well. Since I plan all of my meals out a month in advance I also plan out which foods I will be large batch cooking. I’ve made this simple Freezer Meals List for you to print and some printable recipe cards (I recommend printing on card stock) so that you can get started as well!

Do you do Freezer Cooking or Large Batch Cooking? Which do you prefer?