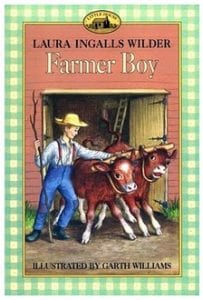 I’ll be honest, Farmer Boy was my least favorite book in the Little House series. Sometimes when I would re-read through the series I would skip it and just go on with Laura’s story. (Probably most of that was due to the fact that I, as a young girl, didn’t care very much to listen to the orneriness of a boy!) But I have to say, that now as a grow woman, Mother Wilder is my hero. Now that I read back through the book I see different things that I missed before. How they ran their household, what they ate, ect. I love this paragraph:

“That was Saturday night. All day long Mother had been baking, and when Almanzo went into the kitchen for the milkpans, she was still frying doughnuts. The place was full of their hot, brown smell, and the wheaty smell of the new bread, the spicy smell of cakes, and the syrupy smell of pies.

Almanzo took the biggest doughnut from the pan and bit off its crisp end. Mother was rolling out the golden dough, slashing it into long strips, rolling and twisting the strips.Her fingers flew, you could hardly see them. The strips seem to twist themselves under her hands, and to leap into the big copper kettle of swirling hot fat.

Plump! They went to the bottom, sending up bubbles. Then quickly they came popping up, to float and slowly swell, till they rolled themselves over, their pale golden backs going into the fat, and their plump brown bellies rising out of it. ~ Farmer Boy p. 75-76

I love that Mother Wilder has a baking day! Baking Day wasn’t something that I grew up with but it’s been something I’ve been implementing in my weekly plans for about the last year. One day each week(I try to do it on Wednesdays or Thursdays but I move it around sometimes when I don’t have the time) I bake everything I need for the week. If you are a regular follower you know that around here we make everything from scratch, breads, cookies, crackers, everything.

Each week I make a meal plan. I try to have this finished by Monday and I make it for at least 7 days. After I make my menu for the week I also make a grocery list if I need to get groceries and I make my Baking Day list.

If you’ve never had a Baking Day before I will tell you how mine goes. In the morning after I finish all my other chores I get out things I will need. I’ve found it’s easiest if I have a separate “station” for each thing I’m making. I get out all my ingredients that I will need. The handy thing about baking day is that everything is out that I need for each item and I don’t have to keep pulling things out of the cupboard and putting them back in. I don’t have much counter space in my kitchen at all but like I said above I like to try and separate things. At each “station” I put the recipe of what I’m making(so I don’t forget what’s in which bowl!) I only mix up one thing at a time so I don’t get confused about where I am in a recipe. Ahead of time I plan what I’m going to be making first. It’s good to figure out what needs to rise and what needs to refrigerate and such before hand. If you have it well planned out you can be baking something while something else is rising and when that’s baking you can mix up the next thing, ect.

Lately my Baking Day’s have become a little more involved. If I’m going to be baking bread I like to bake extra and freeze it so I don’t have to bake any bread the next week. And if I’m making one of something I’ve started to double the recipes and put the spare in the freezer. It’s been so handy to have these extra things in case my meal plan falls through or if we need an extra treat to take for something. Plus it saves money by having the extra things in the freezer because then when I run out of something I just have more in the fridge and I don’t feel tempted to run to the store and pick up and unhealthy and expensive version of whatever it is that I need.

Mother Wilder knew about all this. She knew that she couldn’t spend every day baking bread and doughnuts and that it was better to have things on hand. It freed up her time for the rest of the week and I bet she always had what she needed for her meal plans.

Baking Day takes time; most of one day usually. But I think it’s worth it, for all the reasons I mentioned above and more.

What about you? Do you have a baking day? If you don’t is it something you want to do? What’s keeping you from doing it?