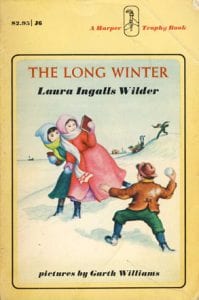 “Clean sold out, uh?” said Pa. “Clean sold out! said Royal. “I’d be willing to pay pretty high for some wheat,” Pa said. “I wish I’d brought out another car load,” Royal replied. “Sit up and have some supper with us anyway. Manzo brags on his pancakes. ” Pa did not answer. He walked to the end wall and lifted one of the addles from its peg. Almanzo exclaimed, “Hey, what are you doing?” Pa held the milk pail’s rim firmly against the wall. He pulled the plug out of the knothole. A round stream of wheat, as large as the hole, poured rattling into the pail. “I’m buying some wheat from you boys,” Pa answered Almanzo.

Around here, we had alot of talk about heroes this week. Heroes that dies protecting their community. In this paragraph, Pa does what he knows he has to do in order to save his family. They need food, and he know where to get it, even though it doesn’t make the Wilder boys very happy, Pa knows what he has to do and he gets the job done.

Yesterday I had the chance to be at my Granny’s apartment for a little while. She gave me a few things she had found while going through her old stuff. A purse that had belonged to her mother’s sister, a photo album that belonged to the same sister, and an article from a 1930’s newspaper. In the article, the writer was talking about none other than The Long Winter, but not the Laura version, he was recalling it from his own memories. On the drive home I read the article through to the hubby. A few parts stuck out at me.

“One school ma’am bundled up her 5 pupils and started to the home of a woman homesteader a hald a mile away. She tied them together and took her big robe. In a few minutes the children’s faces were frozen over with snow and ice and they were screaming and yelling. She stopped, took the big robe and spread it on the ground, put the children on it, then, like a hen, she lifted her flannel skirts and covered the children with it. The next morning she was found by 2 young men on horseback, all the children had survived.”

The article goes on…

“A bachelor teacher had eight children. When evening came he bundled them up and let them start for home. He started for home himself, saw how bad the storm was, so he went back to the schoolhouse and locked himself in for the night. All the children froze and the man disappeared, never to be seen or heard from again.”

And the article ends…

“It shows that every crisis in life produces its heroes and heroines; also it’s cowards.”

In light of everything going on this week, this section in the book and this article that I was given really made me think. In times of need and crisis, are we heroes or are we cowards? Do we see a need and fill it? Or do we think of ourselves and move along with our lives?

Not much to learn today, just food for thought…what do you think?