As soon as we knew that our offer was accepted on our new farmhouse we became very interested in discovering the roots behind the home.

Why did they build it the way they did? Who built it? Who lived here in the last 124 years?

The hubby and I have always been into history (well he wasn’t until he married me but I guess I make it contagious!). Once we discovered an old OLD abandoned graveyard in the Hills and we wouldn’t rest until we learned everything about it as possible. It took us over a year but we gathered up info on the people buried in the cemetery, the town that was nearby (that no longer exsisted) and the flume they used to dig precious minerals out of the hillside. Our trip took us to the area at least once a week, we even made a trip to the state capital for extra records and looked at old newspapers on microfilm. Needless to say, we were a little obsessed 🙂 But it was so much fun and it was a great hobby for us.

With the farmhouse we started by searching for anything related to the address online, when that didn’t turn up any results we decided to give the county courthouse a call and see what they could tell us. I’m so thankful we live in a small town because the courthouse not only let us know they have many records from the house since it was built but we were welcome to come and take a look at everything!

So one afternoon we took a break from renovating and headed over the courthouse. First we learned the basics…the house was built in 1890 and an addition was built in 1930. There have only been 3 owners (including us) since the 60’s. We then headed over to another office and they wrote down many numbers of books and pages that held records for our house. Then it was up to us to pull the HUGE books off the record shelves and look through until we found the correct pages. They were so heavy and we must have gone through about 30 books! The search actually didn’t turn up as much info as we hoped but we were able to write down names and dates. Unfortunately it seemed as though much of the data had issues and some of it didn’t even make sense! But nevertheless, we did gain info.

It took me a while to get through the info but here’s my preliminary findings! We have discovered that there are a few more books we need to check out in the local library’s archives when we get some time. So far my attempts to reach out to family members of the families that lived here have been unsuccessful. 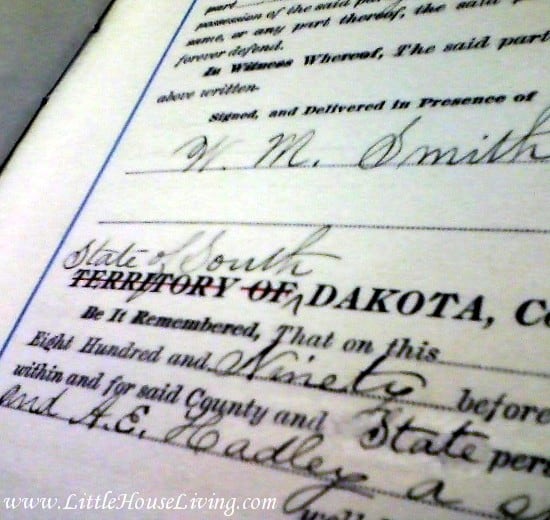 The land our home was built on was purchased in 1888, the year that South Dakota became a state. It was purchased by a farmer that owned another 160 acres a few miles away. The land our home is on isn’t great for farming since it has a few streams flowing through it (and a lot of trees) but it would have been great for cattle. However it must not have worked out for that owner and he sold it in 1890 to someone that we believe was a Quaker.

Quick fact….I had no idea that Quakers even lived in South Dakota until we moved to our farmhouse. Shortly after moving to the house we discovered a very old Quaker cemetery just a mile from us and the area which was once the Quaker church. The name of the owner of our home was the same last name as many that were buried in the Quaker cemetery. Since I couldn’t find his name it’s hard to know for sure but given the proximity to the church and the same last name, I’m guessing it was a good probability.

To be continued on Thursday… 🙂

Check back on Thursday for the next part of the series and make sure you are signed up for my weekly newsletter so you don’t miss any farmhouse renovation posts!