My first glance at the bathroom in our new house made me happy. That seems like such a funny statement, but I thought the bathroom was huge! It was bigger than any bathroom that we’d ever had before! Even though the house only had one I was actually glad about that…less to clean.

Further inspection of the bathroom before we started the renovation was dismal. The tub was very old (cast iron), the sink was cracked, there was an odd protrusion coming out of the wall and for some reason the only outlet was under the sink inside the vanity.

*I apologize in advance for the lack of many before pictures. We just have what the inspector took so you actually get to see what we looked at before we bought it! 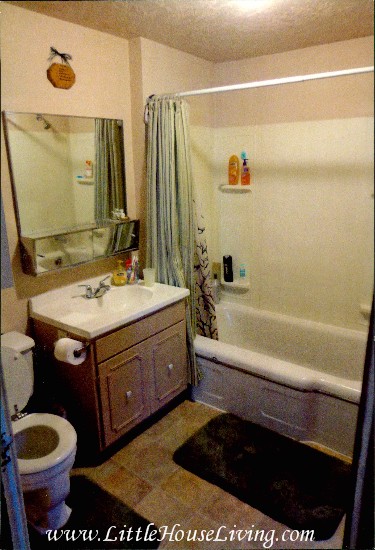 The bathroom looks decent from a distance. The flooring actually wasn’t too old. Ok, maybe that’s the only nice thing I have to say about this room! This tub is very old (made from cast iron and SO cold to the touch!) and had the thin shower surround on the walls around it (from experience we’ve had issues with mold behind these). Next to the tub there was a small linen closet which needed some tlc.

There was a big beautiful window in the bathroom but it was an original window so it was very poorly insulated. I did, however, love the funky green color inside of the window sill, it was my inspiration for the kitchen color!

The walls were a tanish pink and they were plaster with many cracks. 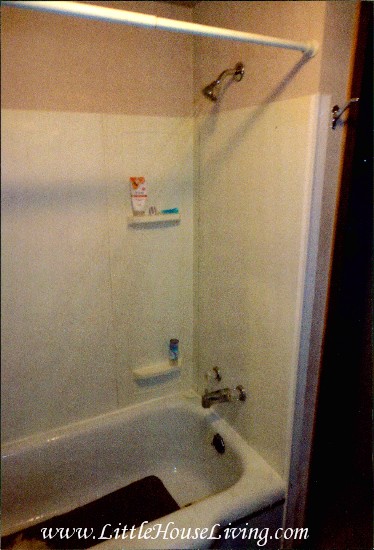 One more reason why the tub had to go…it had this disgusting brown thing stuck to the bottom that wouldn’t come off and you could tell it wasn’t originally brown. Yuck. 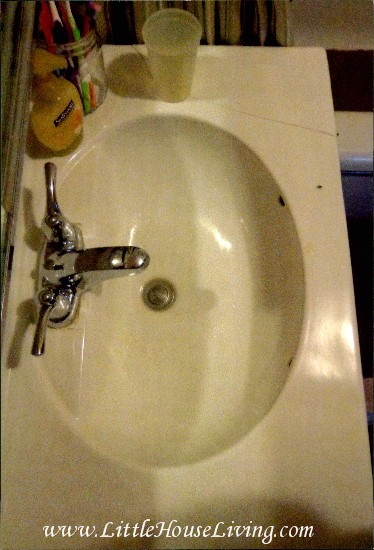 The sink vanity and mirror I’m guessing were from the 70’s, the fixtures appeared newer. It was semi-functional but there was a very large crack in the corner of the sink. Nothing was original, nothing had character. 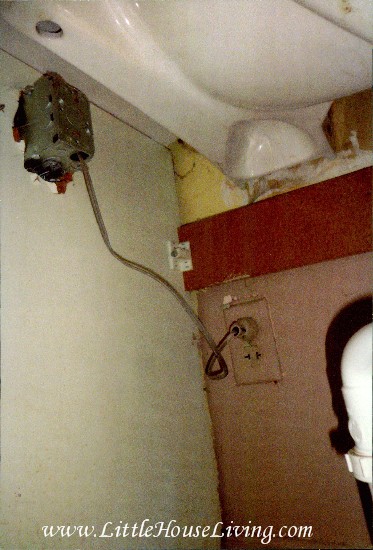 This was the weird electrical box under the sink. It was unsafe and not even a real outlet…it was a cheater plug that plugged into another plug behind the wall. There was no shut-off valves on the sink (or on any of the water in the entire house for that matter), hello major electrical hazard! 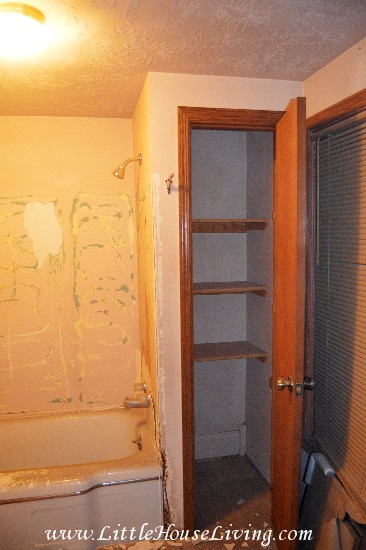 We started by ripping out the shower surround. I liked this linen closet that was in the bathroom but as it stood there was no way to reach the tub plumbing so we had to tear it out to get to that area (there is no crawlspace under this area, the basement is very small). 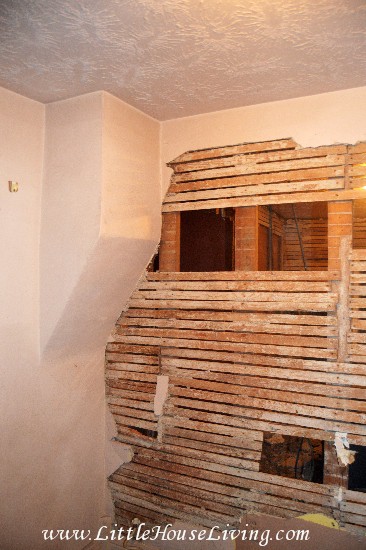 Above the toilet area was this weird bump out in the wall. After removing the plaster we discovered it was the old chimney from the fireplace that used to stand in the kitchen (which is now our dining room). I’m not sure when the fireplace was removed from the house and we aren’t sure why they left the chimney! At first we thought about leaving the bricks exposed but it was in such an awkward place and the mortar was very crumbly. 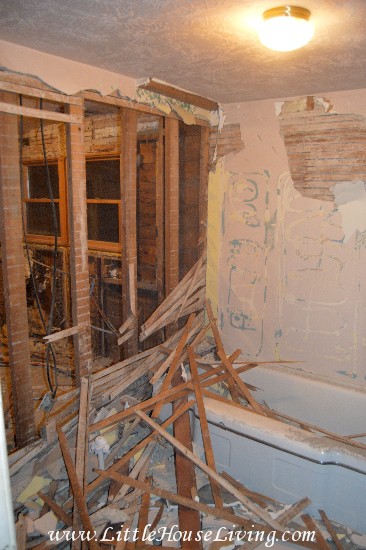 There’s the kitchen on the other side of the wall we tore out! After ripping out the lath and plaster we found that this wall was improperly made, the studs were turned the wrong way. 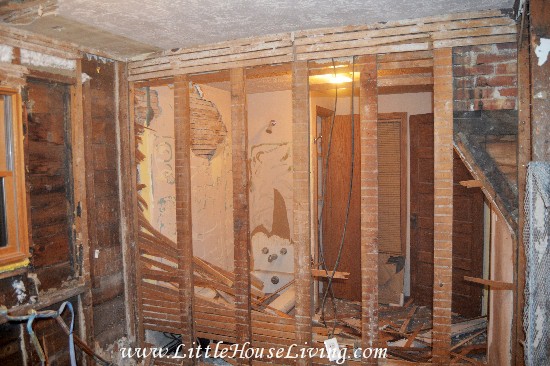 Here you can see the exposed chimney and the bathroom (this is looking through the wall from the kitchen). What a mess! 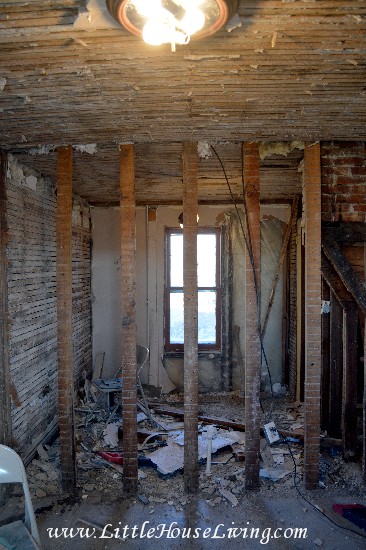 And now I have a bathroom/kitchen combo….just what I always wanted! This picture was taken just before the rest of the lath was torn out and the plaster from the outside wall removed. We did find insulation in the outside wall with the window which was a nice perk. It was pretty much the only thing salvageable in the bathroom. 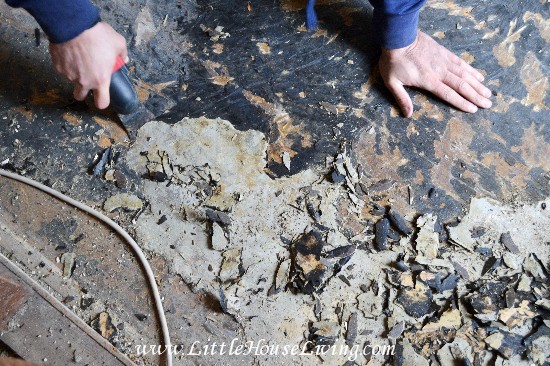 This was the floor after we took the latest layer of linoleum off. It was covered in glues and who knows what else from over the years. We originally did not think it was salvageable but decided to put the effort into scraping it and trying to get it cleaned up. 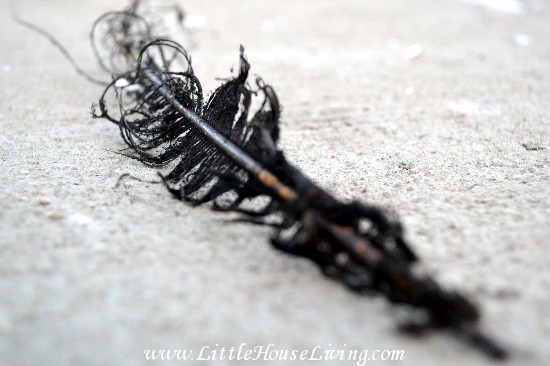 This feather was in the chimney. It fascinates me that it’s burned and charred and probably one of the last things that was ever burned or thrown in this fireplace. I’m not sure if it was from a pen or from a fancy hat….any guesses? 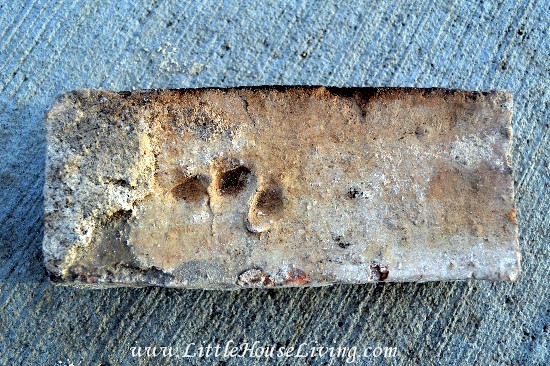 This brick was one that we took out of the chimney. See the fingers prints in it? Those are from when it was made…we thought that was pretty neat. It’s hard to say who made these bricks but since there is nothing stamped on them and there is not (and never was) a brick factory nearby, I would guess that these are handmade by the builder.

Renovating the Farmhouse Bathroom – After Pictures