You are here: Home / Simple Living / Homestead Hints / Chicken Egg Production – What To Do When Your Chickens Stop Laying
This post may contain affiliate links. Please read my disclosure policy. 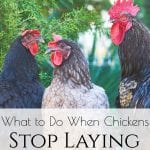 Do you enjoy having backyard chickens but lately have come across some issues in your chicken egg production that you are finding difficult to deal with? Here are some tips and ideas along with a helpful “old-timers” remedy! 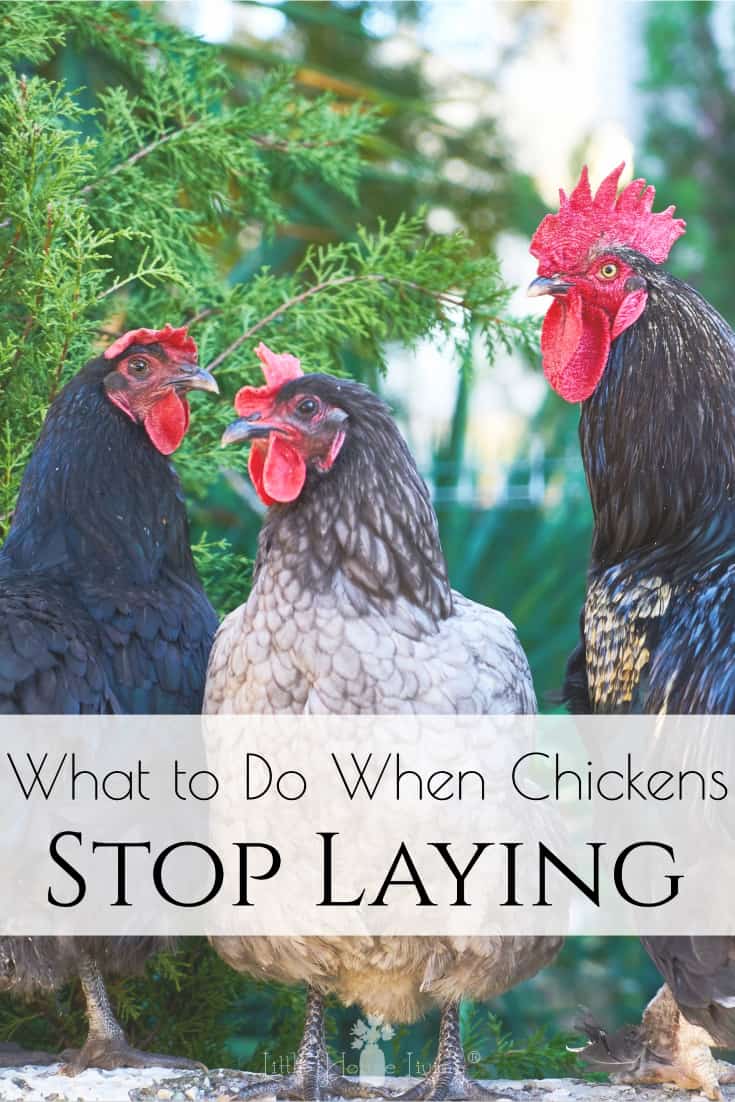 Walking through the soft, sometimes crunchy grass, you head up the path to the chicken barn. The path under your feet is starting to get well worn from your shoes walking it every day. A slow breeze lifts the hair off your neck and tangles it up a bit as you get closer. The grasshoppers are already singing their summer song and a bird and its friend fly out of the tall grass on your left.

You finally reach the chicken barn and you pull open the old wood door. The hinges complain just a bit as you open the door all the way. You can hear the faint clucking of the chickens outside in their fence and the few that are in the chicken barn give you a quizzical stare.

You reach the nests, piled high with soft wood shavings. You get closer so you can reach in and collect the eggs but then to your surprise….there isn’t any.

Let’s move through these one at a time (minus the first one), to learn how to increase egg production. 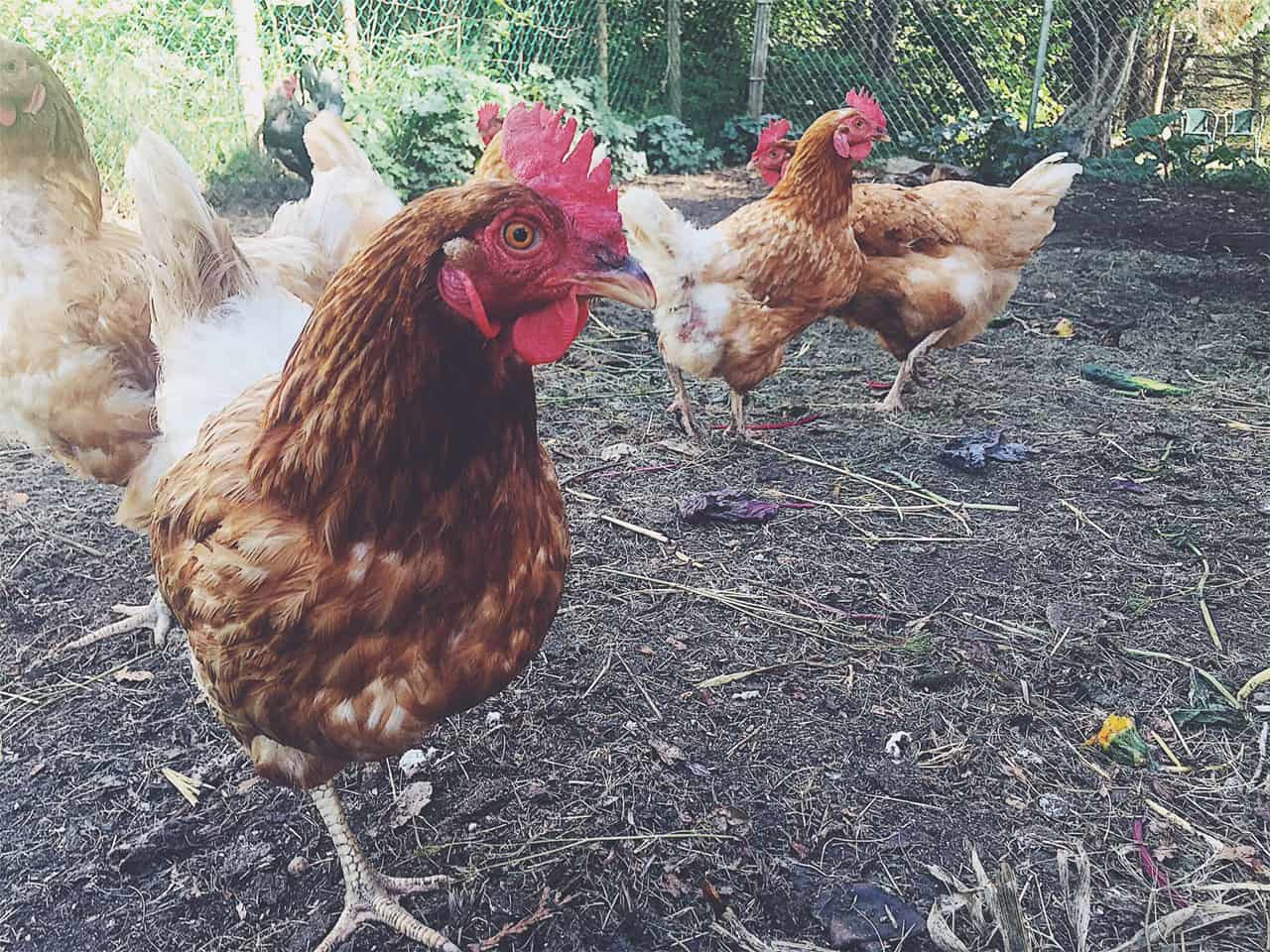 How to Increase Egg Production

1. The chickens stopped laying. Although unlikely in this case that the chickens would stop laying all at once, after a few years it does happen. If your chickens are a few years old and you are noticing egg production waning, it’s probably a good time to get rid of the chickens.

It’s good to rotate your chickens about every 2- 4 years, depending on if they aren’t laying or have slowed down on egg production. Chickens can lay longer than 4 years but if you planned on butchering the meat won’t be very good, it will be too tough and stringy.

2. The chickens are laying the eggs somewhere else. This is also unlikely in this case because they wouldn’t all start doing it all at once. Although I have found eggs in other places than the nest it doesn’t happen very often. If you’ve created a good nest for them with wood shavings or something soft they will keep coming back to it and laying their eggs there.

However, if they don’t have a good nest they will find somewhere else to lay and it’s not a pleasant surprise when you walk through the tall grass and step on a pile of eggs.

3. Are the chickens eating their eggs? This is the most likely scenario in this case. It’s hard to stop them when chickens start eating their own eggs but fortunately there are several different things you can do to prevent this from happening, and hopefully to stop them if they’ve already started.

First, never ever feed chickens eggshells. Chickens do need calcium in their diet to create the shells on the eggs but feeding them their own shells is not the way to do it. Buy a bag of oyster shells at your farm store. They are only around $12 – $14 for a 50lb bag and that will last a long time. In fact, I think we bought ours over a year ago and we still aren’t out yet. Just mix a little in with their regular feed each day to get them to lay nice, hard-shelled eggs. This will also prevent them from accidentally cracking if the eggs get dropped too hard when they are laid, and when a chicken finds a cracked egg, they will peck at it and eat it.

Eating eggs could also mean that the chicken has a lack of protein in their diet. You can check this problem by looking at the color of their beaks. If they are purple or have a purple tinge to them you can be sure they need more protein. Free-range chickens have less of a chance of getting a protein deficiency because they are outside and can eat more bugs. To get more protein in their diet you can also feed them clabber.

–Learn how to make clabber here! 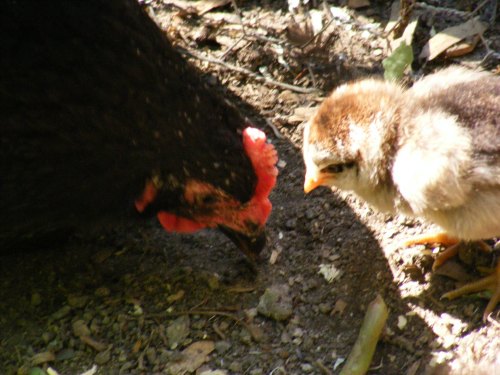 Working on Your Chicken Egg Production

Chances are that if you have chickens, one or more of these things will happen to you over the years and it’s good to know how to increase egg production. Eggs and chickens are an excellent source of protein or a little extra income and are fairly easy creatures to keep. But like anything else, there are tricks to keeping them and keeping them well.

I know that Merissa has told you that she has some chickens. Well, it makes sense that she has chickens, as she grew up with us having and showing chickens for 4-H. We, too, have a brood full of chickens at our place. We surpass 40 in number, (a few more than your average number of backyard chickens!) so I expect dozens of eggs each day.

Lately, our hens have decided to go on a laying strike, and we’re having a bit of a chicken egg production issue. Our hens vary in age from 20 months to 7 months. Yes, all, except our 2 roosters, should be laying.

One day my husband decided to head over to the local feed store. He was picking up a bale of straw for me and I asked him to talk to them about my hen’s chicken egg production. Apparently, I am not alone. Others have inquired about chicken egg production problems this time of year (fall and winter).

Here is what she told us to try….it is an “old-timers” remedy for chicken egg production!

She said to add in 1 Tablespoon of white vinegar to each gallon of their fresh drinking water. She also said to put out some “scratch”, which includes corn for them, in addition to the regular table scraps that we feed them. I went out and offered up these two remedies to our birds immediately. I’m not sure which of them worked the best, but slowly their laying picked back up again.

Remember, this little trick won’t work on birds that have had some kind of trauma to stop them from laying (scared by a predator) or chickens that are going through a molt.

Until next time,  Julie

Have you ever had to deal with missing chicken eggs? Have you had a decrease in chicken egg production? Have any of these helpful methods worked for you on these issues?

This article on Chicken Egg Production was originally published on Little House Living in October 2011. It has been updated as of October 2019.