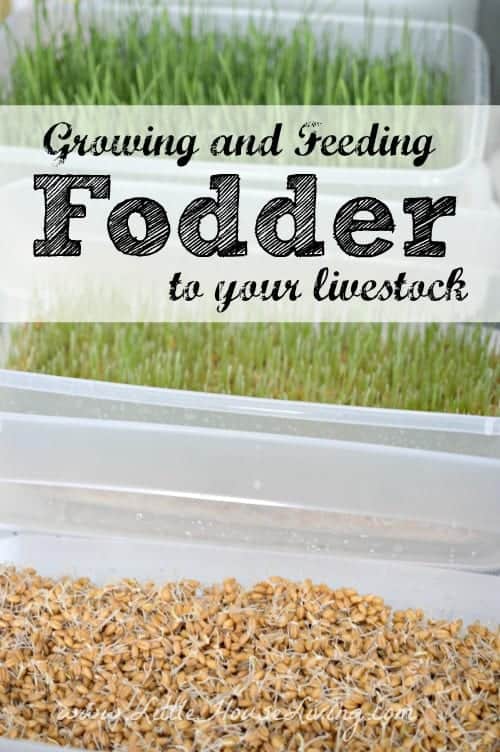 Looking to stretch your livestock feed budget and to feed your animals the best possible? Learning how to grow your own fodder can be very helpful!

If you would have asked me a few years ago what the meaning of fodder was and what you do with it I wouldn’t have been able to help you. But, since adding heritage pigs to our little farmstead animals, I’ve learned quite a few things about fodder, sprouting, and what it means to have a foraging animal. 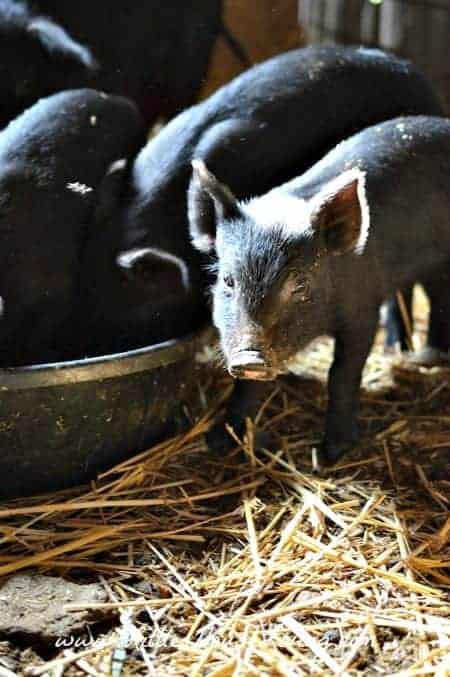 In November of 2015, we picked up a few little Mulefoot piglets to add to our farmstead. Mulefoot Pigs are a true heritage breed and are pretty rare. They aren’t as highly prized as a regular feeder pig because they are not a fan of grains which most pigs are now raised on. Mulefoot Pigs have retained the knowledge of foraging and they love being a true “pasture-raised” pig.

In the summer, forage plants will be easy to come by but in the dead of winter with snow on the ground, there isn’t much available for our little pigs to munch on. So we’ve been working on coming up with healthy alternatives that our piggies will love.

In addition to sprouting, I grew fodder for pigs and all of our other creatures; goats, donkey, and cows. We’ve also grown it for our chickens.

So, what is fodder?

Fodder is a natural and highly digestible feed that you can grow for your animals and livestock. Although from a grain, fodder is “alive” and contains many more nutrients to keep your animals healthy.

Where do you get fodder?

You grow it! You will need a few different grains (barley being the most popular because of it’s nutrient value), some containers, and some kind of rinsing system.

How much does fodder cost?

Fodder is actually much more cost-efficient than just buying grain. From one 50lb bag of grain, I can get at least triple that weight in fodder. We pay $33 for 45lbs of non-gmo barley from Azure Standard, so for us, it’s a great value for the money and our animals are getting a healthy plant to eat.

Ok, now we know what it is, let’s get started making it!

How to Grow Fodder

I have a fairly simple fodder system right now. I know some that use solely fodder and hay to feed their animals, but we don’t currently have the space to produce that much. For our animals, it’s simply a supplement food. (p.s. Never feed animals like cows fodder only, they still need hay for roughage.)

Here’s how I put my system together. 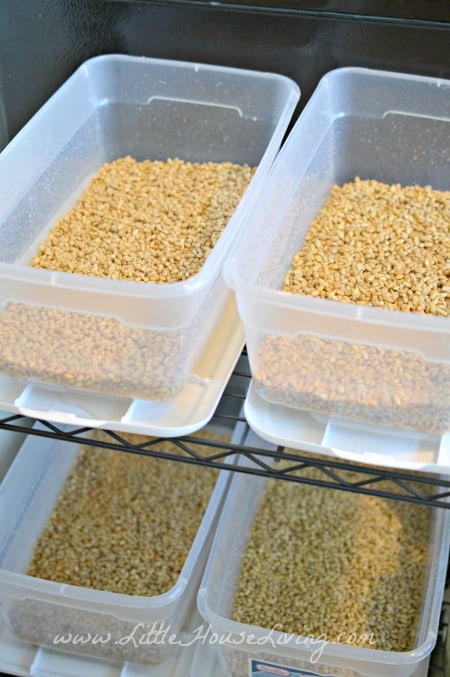 We simply took plastic shoebox sized totes (you can usually find these at the Dollar Store) and my hubby drilled small holes into the bottom of each one with a small drill bit. Then we placed each of the totes on the upside-down lid to use it as a drip tray. I then placed these containers on a wire shelving unit in an area of our house that gets a good amount of sunlight and is fairly warm. 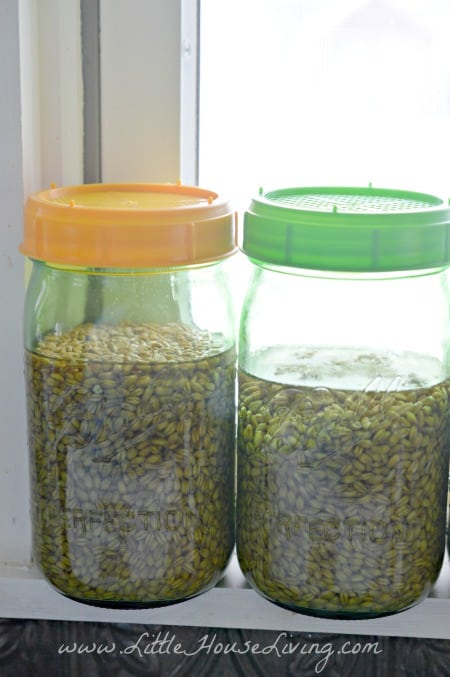 Place the jars in a spot where they won’t be disturbed for 12 to 24 hours. I use these Sprouting Jar lids for the tops of the jars to rinse and drain things I have sprouting. I was using cheesecloth, but it got pretty yucky after a while. If you are using a very fresh grain you won’t need to sprout it as long.

After 24 hours, drain any remaining water and rinse the seeds. Place the seeds in the plastic storage totes in a flat layer. You can give them an extra day in the jars if you want to. Just be sure to rinse twice. 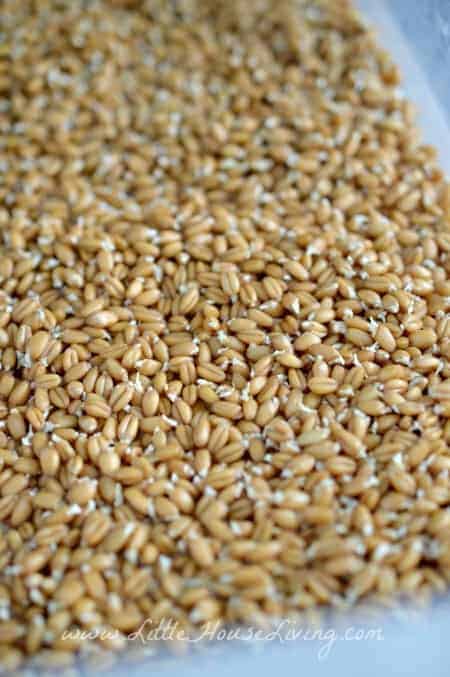 By the second day, (at the latest) you will want to make sure your grain is in the containers. Spread it in a somewhat even layer and rinse it twice a day. To rinse, I just take the container, place it in the sink and spray it over with my sink sprayer, then I gently shake off extra water and place it back on the lid (aka the drip tray). If your grain doesn’t seem moist enough you may need to rinse it three times a day. 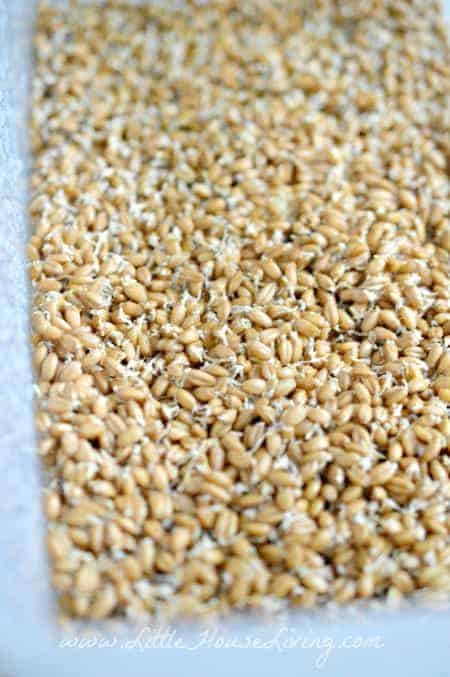 By day three you should see some good little sprouts starting (p.s. I’ve found that if I keep my sprouts in the jar for at least two days, the sprouts are WAY bigger at this point). 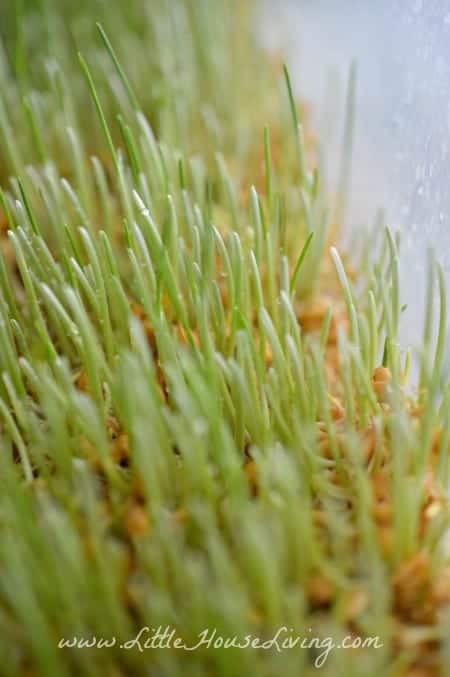 This is my wheat fodder by day four. The grass part isn’t super high yet but the roots are getting big. 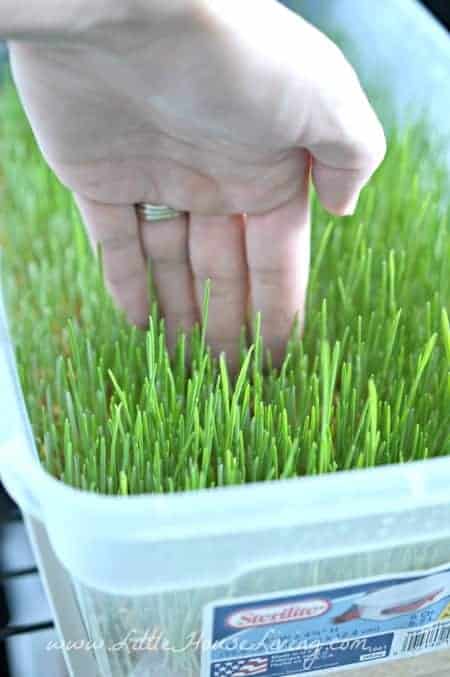 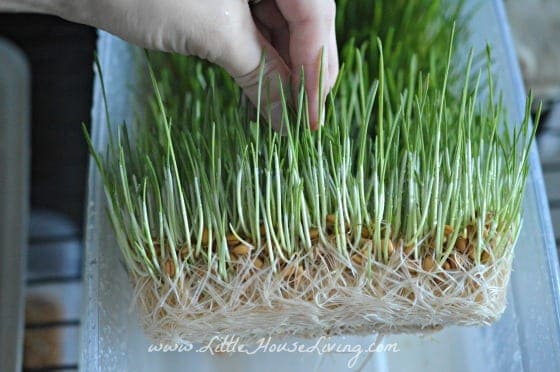 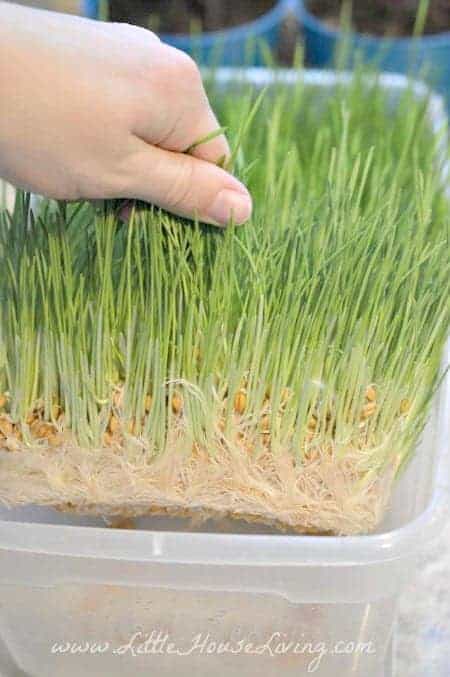 You will want to harvest your homemade fodder by day six or seven or your it will start to lose its nutritional value. Depending on the type of animal you are feeding, you can either break up the fodder into pieces or simply toss it into their area and let them pick it apart!

I thought it would be fun to do a comparison of the prices for the grain and the final fodder product. Of course we want to make sure our animals are healthy and getting good nutrition, but we also want to make sure we are getting the most for our money! 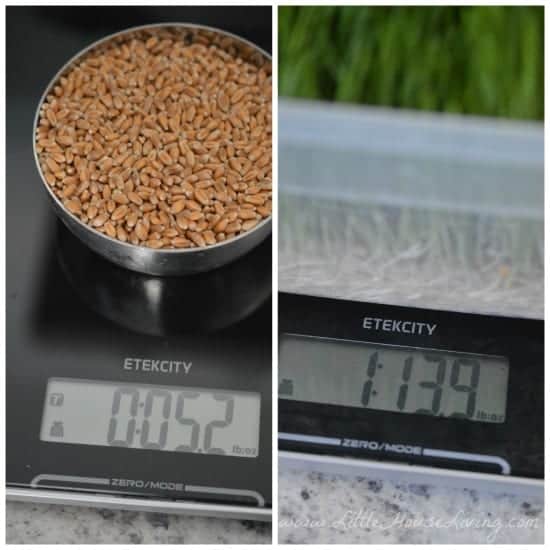 We use 1 cup of wheat or barley per container that we make into fodder.

As you can see, instead of paying $0.55 per pound for just the grain, we actually end up paying less than $0.09 per pound for a much healthier and nutritious product! 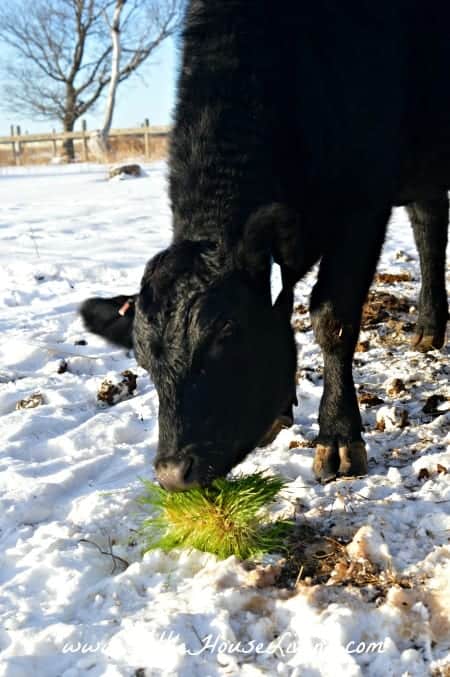 Maggie is enjoying her breakfast!

Looking for more animal-related posts for the homestead? Here are a few to check out next:

Have you ever tried growing fodder? What was your experience? What animals do you, or would you, feed it to?

This post on How to Grow Your Own Fodder was originally published on Little House Living in January 2015. It has been updated as of January 2020.