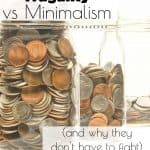 Have you considered having less stress in your life by turning to minimalism but it doesn’t seem to work out with your frugal nature? Today I’m sharing my thoughts on both of these lifestyles and how I’ve become a frugal minimalist. 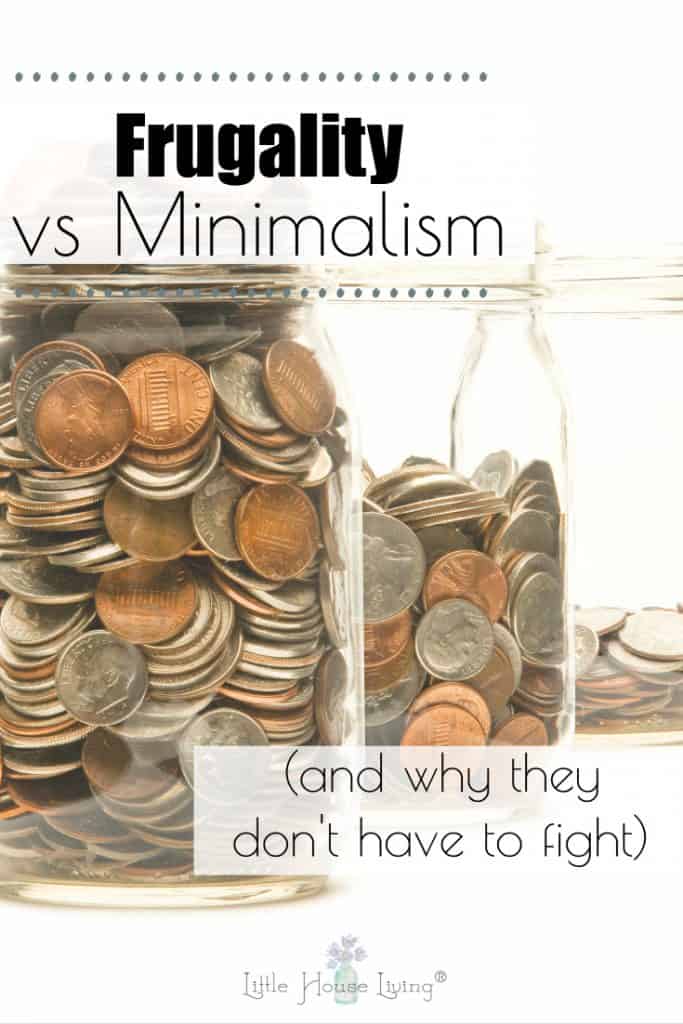 This spring as our family was preparing to move and I was cleaning out our home, I had a lot of questions for myself. I had always considered myself to be something of a minimalist. I dislike clutter, I don’t keep knick-knacks, I have minimal furniture clutter (if you’ve read my book, 31 Days to Simpler Living, you know all about furniture clutter!). Not only that, I keep a minimalist wardrobe, I’ve drastically downsized in areas that one wouldn’t think of, we keep minimal toys for our children.

In so many different areas of our lives, I thought, “I am a minimalist”. That was until I cleaned out my home.

I’ve already written about what it’s like to downsize your belongings by 75% so if you missed that post, be sure to run back and read it too. Now that I’ve had all summer to gather my thoughts on the topic, I have more to share.

A question that I often get asked is,

“How do I downsize or have minimal things and still be frugal?”

Let’s explore this a little further today together. Minimalism vs frugality…do they need to fight? Or is it possible to live a life of minimalism and frugality?

First of all, we have to understand what these types of questions are referring to. In general (and this isn’t always the case), someone that is frugal tends to keep things or stockpile things that they think can be used later. Have you ever read The Tightwad Gazette? It was a very common re-occurring topic throughout those newsletters that we need to hang on to this or that “just in case” we would need it someday to avoid having to buy something else.

That’s a common theme among those that consider themselves to be frugal. We have to hang onto things we might otherwise toss just-in-case the day comes that we need them. Perhaps not even things that we would throw away, it could even be things like extra fabric, craft supplies, kitchen supplies, etc. 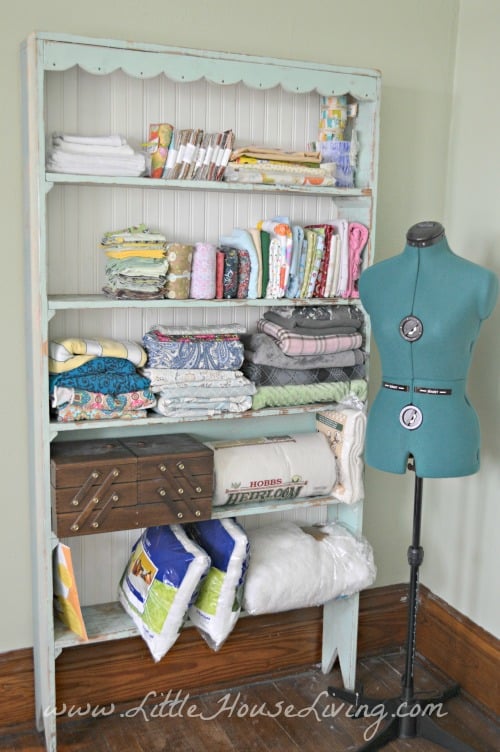 When I was cleaning out our house to sell it and working in my sewing room, I came across large amounts of fabric that I had purchased, put on a shelf, and never used. It was so pretty, had such a nice pattern, or was such a good deal…how could it be passed up? After days of contemplating what to do with all the fabric, I ended up selling it. All of it. Every single bit except for a few pieces that I needed to complete a project that was already in the works.

All of that fabric that I had kept around for “someday”. Almost all of it was purchased on sale at a deeply discounted price so it wasn’t that I had a lot of money into the fabric that was sitting around. What I had was stress. Stress of wondering what I should use it for. Stress over the money I used to buy patterns to make something with it (that I never did). Stress over it beginning to fade, or the styles being something I no longer could use. When I finally looked at that big mess of fabric through clear eyes, I saw the stress. I saw the clutter. I saw the space it was taking up in the house that could have been used for something else. I saw something that I didn’t want to move with us because I never knew if I was going to use it or not.

After I made the decision on the fabric, I realized that the same principle applied to so many things in the house. This made it extremely easy to clean out and get rid of most of the things we owned. I realized that the stress of keeping it all for “someday” wasn’t paying off and I needed to re-route my frugal thinking. 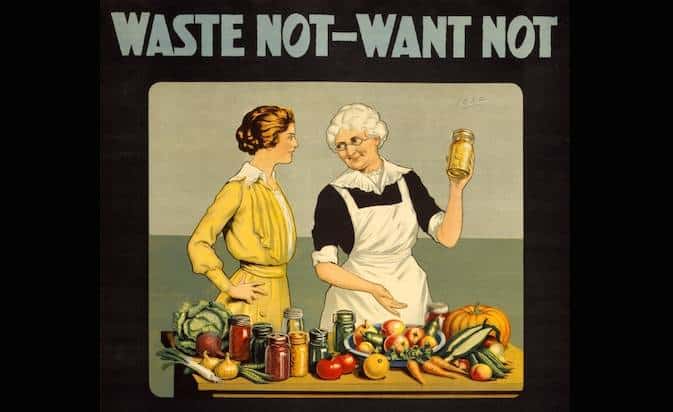 Many of us with a frugal mindset were raised in a home where nothing went to waste. Perhaps we grew up in a home without much extra money and thus it was ingrained into our brains that we need to keep things in order to have them for later and not have to spend money on them.

I think it’s time to challenge that way of thinking. Instead of filling up our homes with “cheap” things that we may or may not need someday, why don’t we skip the garbage and use the principles of minimalism to live a frugal life? 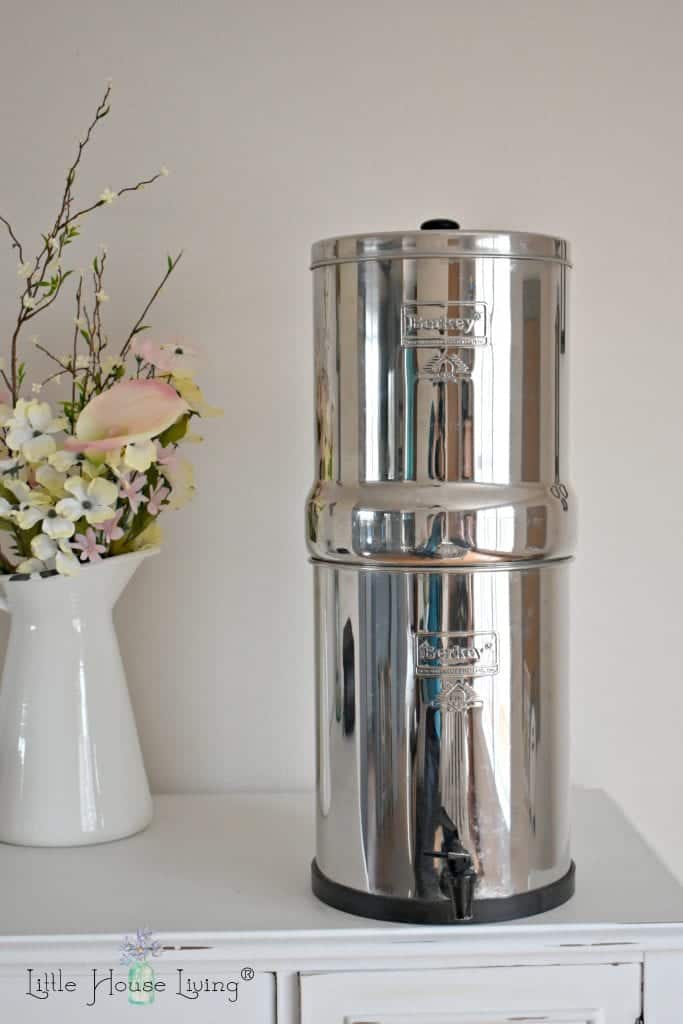 What exactly do I mean by this? I mean that instead of spending a dollar or two on a piece of tableware that may last a while before it fades or chips, let’s spend $5+ per plate and get something quality that will last forever. A good example of this way of shopping would be my Berkey. We could spend a lesser amount of money on a water filter that would go on our tap. Perhaps then every time there is a sale we can stock up on lots of replacement filters so we always have them and we got them at a bargain price. Or maybe you could invest in a quality filter like a Berkey. I’ve had mine for over 6 years and the original filters are still going strong with regular cleanings. The filters cost more to replace and the unit costs more in the beginning but in the long run, it’s saving me a lot of money and stress by not having to buy and store all of those “bargain filters”. Less money + less stuff into my home = a good thing! Instead of something that I needed a lot of (replacement filter, replacement units, a special pitcher to store filtered water in the fridge, and whatever else I would “need”), I only have the one unit.

I know that quality over quantity is a simple enough concept to grasp, but it’s not as easy to put into practice. It’s hard to pay the upfront cost for one quality thing versus shopping for the keep thing or hanging onto lots of cheap/free things until we need them. (If that day ever comes.) But we have to remember, sometimes the hard things in life are worth it.

This is getting quite long and I feel that I’m beginning to ramble on so I will sum up my thoughts and then hopefully you will share yours in the comments.

After cleaning out 75% of our belongings and dealing with all of the things that I thought I needed to store for “later”, I can tell you one thing. All I want to do is keep going. All of our things that we kept are currently being stored in a 7’x20′ trailer. We’ve already decided that when we move in our new house, we don’t want to bring anything directly inside. We’ve lived without it for 5 months and I don’t miss a single thing that is packed in there which means most of it needs to go.

I’ve also made decisions on what will be going into the new house. We sold almost all of our furniture except our mattresses and I don’t want to buy anymore. We’ve been given a table, a desk, and some small bookshelves and beyond that, if we need something for the house, we will just make it. (The only thing I plan to buy is a couch.) I also don’t want to buy any new art or decor. We can make that too if we really need it! (My husband does some amazing watercolors!) The fact is, I just don’t want “the stuff” anymore.

Does that make us “real” minimalists this time? I suppose it depends on your definition but sure, I would say so.

Does that make us frugal? I believe so. By not spending money on stuff that we may or may not need or use, we can save it or use it for something else that we truly want to spend money on.

Can being frugal and being a minimalist go hand in hand? Absolutely. All you have to do is modify your way of thinking and see things for what they really are and really can be.

What are your thoughts? Are you a minimalist? Are you frugal? Do you think you can be a frugal minimalist? What do you need to work on to get to where you want to be?

This article on Becoming a Frugal Minimalist was originally posted on Little House Living in September 2018. It has been updated as of September 2019.