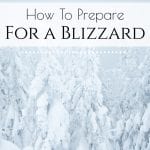 Weather is unpredictable, are you prepared for heavy winter storms? Here’s a little more about what mega winter storm Atlas taught us on How to Prepare for a Blizzard. 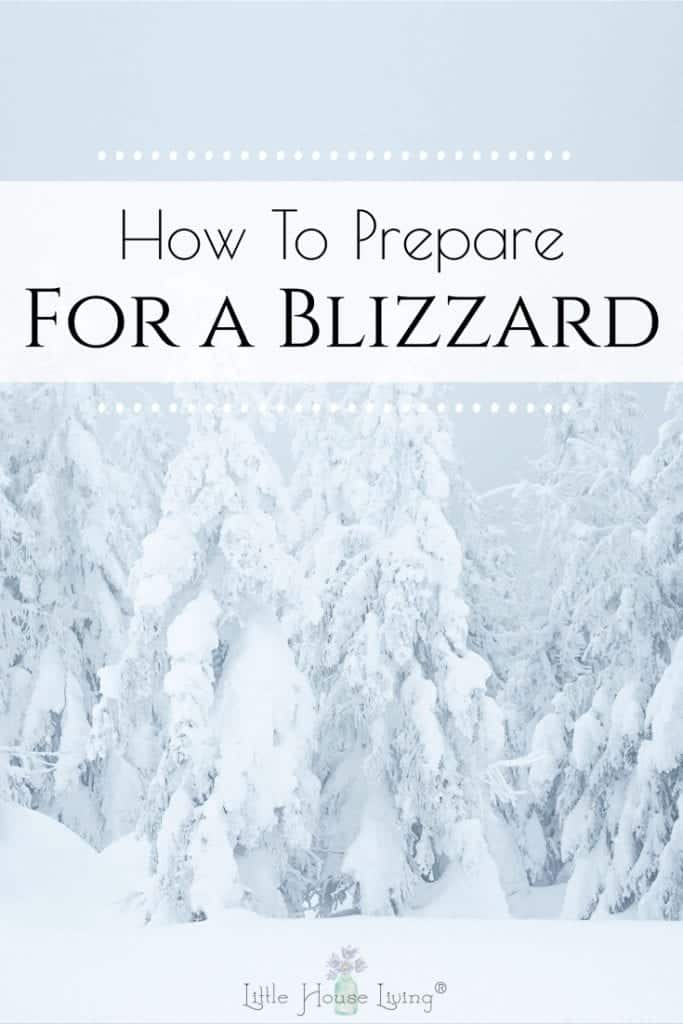 It’s been a very long last couple of days. Early last week we learned we would be expecting snow here in western South Dakota. As the week progressed, the weatherman warned everyone that it was going to be as strong of a storm as we had back in April (25 inches of snow), a good old South Dakota blizzard. It seems as of recently the weatherman has been increasingly wrong so we took the news with a grain of salt, but we still made a few winter preparedness plans. 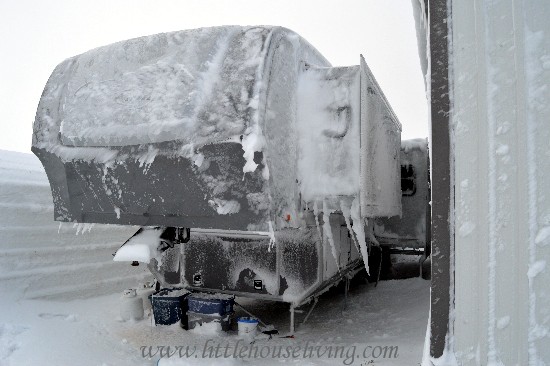 As of right now, we are still in the RV. We aren’t able to close on our old house or finish the loan on our new house thanks to the government shutdown, so we are just completely stuck. It’s not the greatest feeling in the world, but we are grateful to have a temporary home to live in, even though it’s not ready for winter because we had never planned to stay the winter in it.

The storm started on Thursday afternoon with rain. We filled up our water tank because we had no other way to continue to get water (after it froze) in the rv due to where we are parked. It rained through the night and until early Friday morning when it switched to snow.

Friday, during the day, it snowed hard all day long. The power flickered all day until finally going off for good on Friday afternoon. Friday evening we realized between the wind and the blizzarding conditions, we’d been stuck indoors and using most of that precious propane.

By Saturday morning we were running low so we kept the furnace off most of the day. By Saturday afternoon even our backup battery power was drained (something is wrong with the batteries we learned!) so we spent the night in below freezing temps in the RV with no electric or heat whatsoever. It was a cold night!

By Sunday morning the sun had come out and we could fully see what kind of clean up we were dealing with. 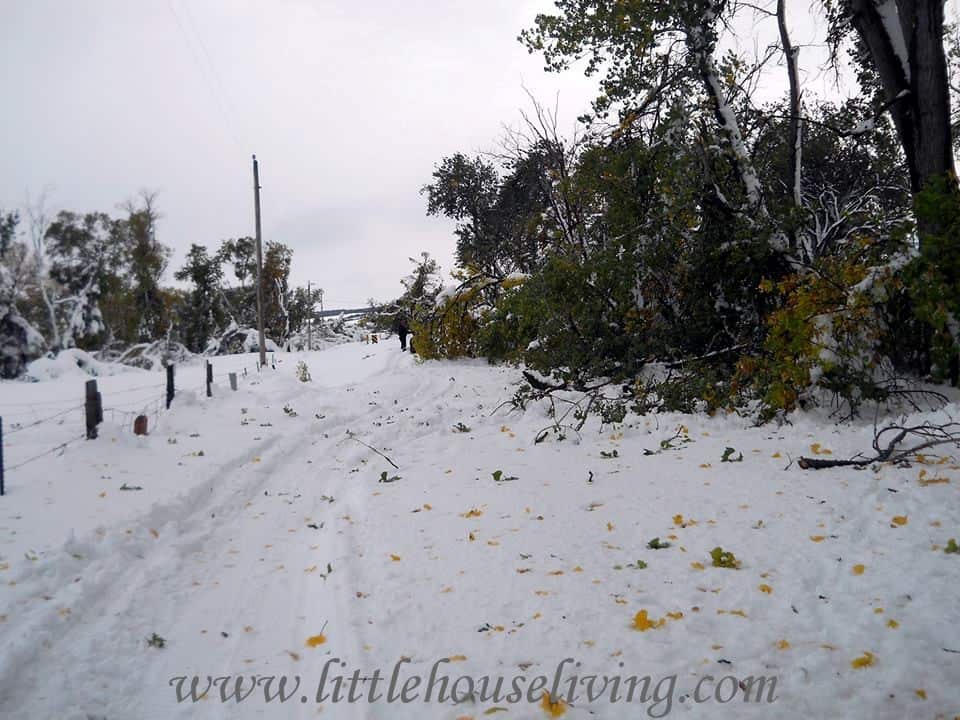 This is what we found. The road out of where we are right now is about 1 mile and a half long. The first part of it was mostly covered in 6-8 foot drifts. By the time we made it to the bridge (about a mile down) with the snowmobiles, we found this scene. (Yes, that is a person standing next to the trees in the middle of the pic.) Massive trees were downed right over the road and bridge. Clean up is going to be a process!

We feel like we learned many things on how to prepare for a blizzard from this storm and I wanted to share them with you today so that you can keep them in your mind too if you are in an area that gets blizzards or any kind of natural disaster that keeps you at home. 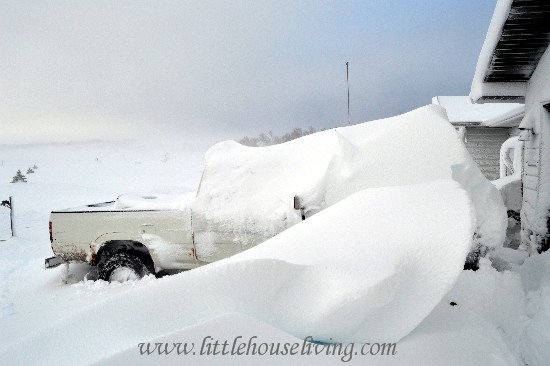 What We Learned From The Blizzard on How to Prepare

Always be over-prepared.  Before the power went off, my mom spent some time making sandwiches and easy meals. I didn’t. That left me trying to heat up soup in the dark. Next time when I have advance warning I will put together some meals that are easy to heat up for us.

Keep At Least a Week of Fuel on Hand. We thought we had enough propane and we didn’t. (We actually think we might have a leak.) From now on I want to make sure we always have a good week’s worth of propane on hand in the winter and that our cars are totally fueled up.

Know that the unexpected can happen. We were given the estimate of 18 inches of snow at the most (which was already crazy because our average snowfall for October is 1.7 inches). We ended up with 35 inches of snow. 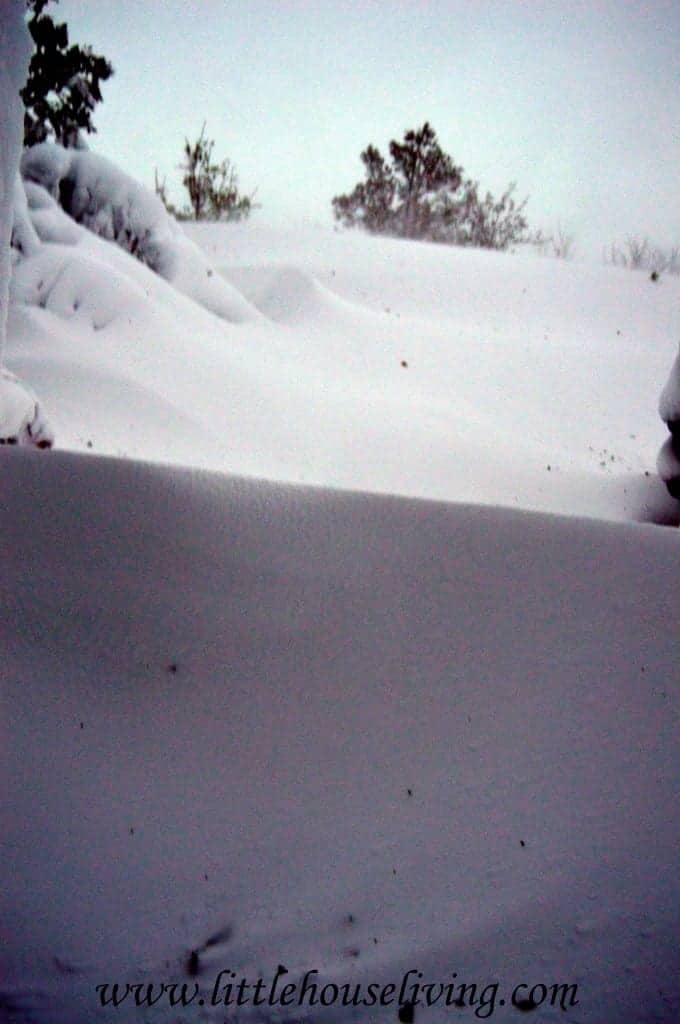 Things We Will Do Differently Next time to Prepare

Get more solar lights. This solar light was a lifesaver and was our only light for days. I was so thankful for it and we also learned it didn’t need full sun to operate, just a lighted sky (it still charged during the cloud cover). I’m going to pick up several more to have on hand and put around our new house when we get there.

Be more prepared for the little one. After the power went out my only focus was survival. Food, water, shelter, heat. I was mostly prepared for those things. I was not prepared for a little one that didn’t understand why we had to sit in the dark. For next time, I’m going to prep a special fun box for him of new toys and games so it will distract his mind from what’s going on. One thing I did do right was having this battery powered glowstick for him. He thought that was pretty cool.

Have more for us to do. Being stuck inside with no electricity… there are only so many games you can play after a couple of days. I think for next time I may prep a way for us to watch a movie or do some other family activities that will help take our mind off things. Suggestions welcome!

Get more solar/battery operated things! I plan on doing some research very soon on alternative heat methods or power methods that would make us better equipped for the next storm. 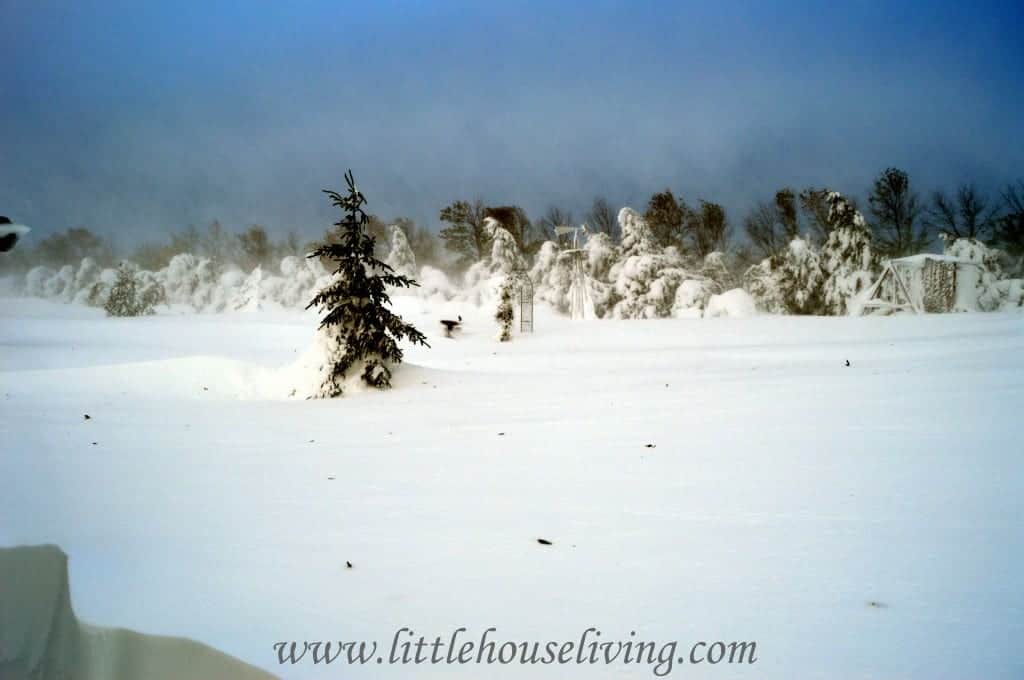 What We Did Right to Prepare for the Blizzard

We had plenty of warm clothes on hand. Sweaters, slippers, snow clothes, mittens, hats, and more. We did this one right. Even if we couldn’t have heat we stayed warm with layers.

Had alternative heat to cook with. This was a BIG one. I have a propane stove in the camper so cooking was not a problem. As much as I used to love my electric coil stove for canning, I know now that I will ALWAYS stick with a gas stove, even in the new house.

Kept a good supply of water. We were able to shower and everything in the RV thanks to a large tank of water and a water pump. I plan on continuing to have a very good water stockpile no matter where we are. We also had water bottles on hand for drinking water which made that easy and we didn’t dirty cups so we didn’t have to do the dishes.

–Read more on How to Survive Temporarily With No Running Water

Had paperware on hand. Yes, I know, even I shy away from paper plates and plastic dishes but I still always have some on hand (mostly for traveling). When you want to conserve as much water as possible, paper and plasticware are the way to go. I’ll always keep a small stockpile on hand in case of emergencies like this one.

—Ideas for Food to Stockpile 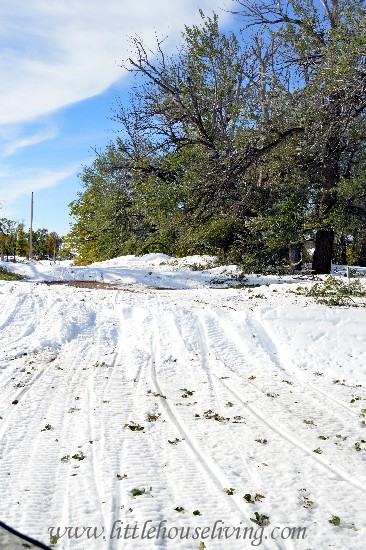 It was definitely some pretty crazy weather. The snow was beating down while it was thundering and lightening at the same time. At the worst point, over 40,000 local residents went without power for over 24 hours. Numerous severe alerts popped up on my phone throughout the weekend including one for “shelter in place” which I’d never seen before.

We’ve already been warned that the rest of this winter is going to be similar so you better believe we making a list for winter preparedness… or we soon will be when we can get out of here! (The picture above is our road right now, impassable!) I think we are in for a long winter.

Here are some other ways you can get ready for winter so you can be better prepared too.

Looking for other Winter Preparedness tips?

What are some things that you have learned from recent storms on how to prepare for a blizzard (or other natural disaster) that you will make sure you do differently next time?

This post on How to Prepare for a Blizzard was originally published on Little House Living in October 2013. It has been updated as of October 2019.