What We Learned From a Year of Fulltime RV Living

If some one had told me a year ago what our lives would look like today, I wouldn’t have believed them. In January of 2013 we finalized our decision to move into a rv fulltime and sell our house. We moved in permanently in February of 2013. This wasn’t a quick decision, we had thought about it for a long time. We prepped for many months, purged our belongings several times, planned for being in a small space with a little one, and figured out where we were going to go. 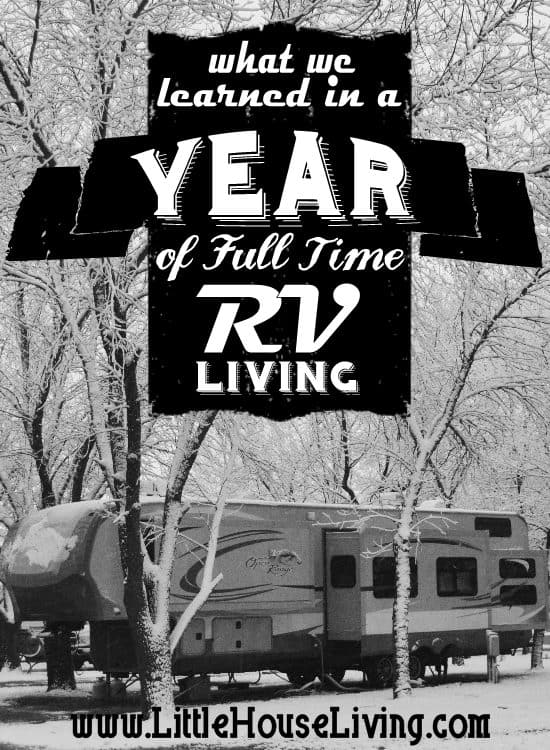 After a few months of living in our rv we decided that we were ready to hit the road and travel fulltime. It was an amazing dream that we had and we were so excited to see it happen. This took more planning, figuring out where we would be going, buying memberships, preparing our currently stationary rv and we finally planned on hitting the road in mid-October. (We’d finally gotten an offer on our house at the end of July)

Then October came around and so many things happened at once. The house-selling didn’t go as planned, the government shut down, the big blizzard hit, and all our beautiful plans went down the drain and our hope was dashed. It was almost winter, we were unable to travel, had no home to go back to and no where to go.

But somehow in just a week’s time we managed to pull off a miracle. In just a few days we had found a home to buy, had an accepted offer, had a job offer for the hubby, and started making plans to move 300 miles from what I’ve always known as home. Now here we are…almost done with our time in the rv and getting ready to move into our renovated farmhouse that we’ve been working on for the last 4 months. Crazy.

So what did we learn from our year in the rv? Would we do it again? What would we change? Here’s my summary of all this and more from our time living in an rv…

What did you learn from the last year of fulltime rv living?

We learned that you need SO much less than what you think you need to get by. And when you think you’ve gotten rid of everything you don’t need you can always find more that you can get rid of. We’ve learned that together as a family, we can get through anything. We’ve also learned that personal space is important. There isn’t enough room in the rv for each of us to have our own corner, I would have loved that some days! We’ve also learned that it’s important (but very possible) to be prepared for weather no matter where you live. In the rv we lived through flash flooding, scary winds, and blizzards and came out on top.

Would you do it again?

My answer might surprise you….in short, no, but maybe. If our son was older and not a very energetic toddler, it would have been easier. Or if he was a baby that didn’t make huge messes all over the floor, couches, beds, ect, I think it would have been easier. If we’d been in an area with a more temperate climate we would have been able to be outside more. Let me tell you, being stuck inside on these cold days with a crabby, teething, way-too-energetic toddler has been trying on my nerves. I’m very ready to have more space for him to run. However if you ask me in a few months after not living in here, I might say yes, I’d do it again. 🙂

My thoughts after 3 years …. We would probably do it again as long as we have proper space to be outside or activities to be involved in.

What would you change?

We would have traveled right away instead of thinking we would be happy being stationary. Life is too short to be boring and not take chances once in a while. I wish we would have taken the chance when we had it and at least gotten to travel for a few months before we had to settle down. We would not have changed our rig or truck, we were very happy with both and the options and features we had.

My thoughts after 3 years… I still feel the same, if we lived in an rv again we would plan on traveling more and not being stationary more than we had to.

Do you regret living in the rv for a year or the choices you made?

My thoughts after 3 years… I don’t regret any time that we lived in the camper (we’ve done it 3 times over our 10 years of marriage) and have fond memories of each time. It helped bring our family closer together.

What was your favorite thing about living in an rv?

Becoming a minimalist. We really didn’t have much before…or so I thought, but getting rid of almost everything that we didn’t need was one of the biggest unexpected blessings. I no longer feel like we have the burden of “stuff” and it’s allowed us to focus on so many other things that are important in life.

Update after 3 years… Looking back, my favorite parts were the family bonding that happened. You come to realize you are all in this adventure together and together is the only way you can make things work.

What are you looking forward to the most in the house?

A real bathroom with a real bathtub. Normal sized beds. A real stove that I can pressure can on. A septic system we don’t have to drain manually.

So many things we’ve learned over the last year. It’s been quite the crazy roller coaster ride! Feel free to ask my any other questions you might have about our experience in the comments section.

Read our full series on Fulltime RV Living and catch up on our last year!