This is part 6 of the story I have been typing up here, handwritten by my great-grandma born in 1892 in South Dakota.

Frank did not have good health after returning from the War. He went from doctor to doctor and had no faith in any of them. He spent much time in various hospitals, mostly veteran’s hospitals. During his hospital stays, I did a lot of the cattle and hog marketing. We also had hired help to help raise cattle and hogs.

We lived through drought, grasshoppers, anthrax in cattle, sleeping sickness in horses, and cholera in hogs. We had thistles, army worms, cinch bugs, and beetles. People wondered what was coming next.

I raised chickens, always had a garden, and canned a lot of everything. We didn’t have refrigerators in those days so to keep things cold, we would put food in a bucket and lower it into the cistern. We churned our own butter. One year I canned 40 quarts of duck meat. That always came in handy on wash days. In the spring, we would butcher beef and pork for the summer use. We made bologna and cured bacon. We would store bacon in the oats bin to keep it from molding.

Saturday was the day to go to town. We would give the store clerk our grocery list and she would put the order up. We sometimes brought eggs to town and the store clerks would even carry the eggs in from our car. The children would go to the movies for 5 or 10 cents and us women would go to the cafe for a treat of some kind and pick up a little gossip.

At Christmas time, we had to go to my husband’s family’s home. There was plenty of talk, all with hands and arms waving — a family trait. Talk about good food; roast duck and goose, kolache, and everyone would bring food. Santa Claus would come with a big sack on his back, presents for all the little kids. It was usually one of my husband’s younger brothers who had a Santa Claus suit. They would drive away from the house and then come over the hill in that red outfit. The kids were so excited and some of them scared. Those were the good old days. The children loved to get together. 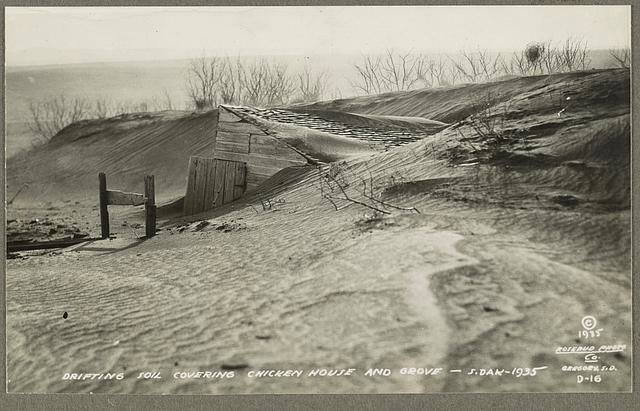 During the 1930’s, there was severe drought and depression. Dust storms would come and the sky would get black with blowing dirt. It was frightening. Every storm would leave drifts like snow drifts. People had no food to feed cattle and much stock was killed to put it out of its misery. We never did this. My husband would go miles to buy feed. One time he bought hay all the way in Nebraska. Another time we bought a few hogs for what we thought was a low price. They had been fed on thistles and could hardly walk. Tractors came in and many horses were sold to mink farms for feed. That was a sin. They never got any of our horses. Then the rains came and everybody worked hard to get the country back into productions. Even President Rosevelt saw to it that everyone had work and got paid for it. They even planted trees on many farms and called them “shelter belts”.

Just had to make a note in here. While reading this story the first time I had to laugh about the waving arms and hands as a family trait…I absolutely have that trait! Now I know where it comes from 🙂