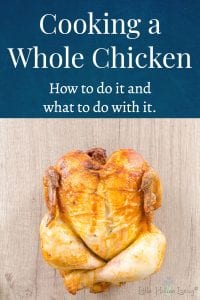 Have you ever considered buying a whole chicken because it’s a lower price than other cuts but have wondered what you do with it or even how you cook it? Today I’m sharing all about cooking a whole chicken and how we use it to stretch our grocery budget. 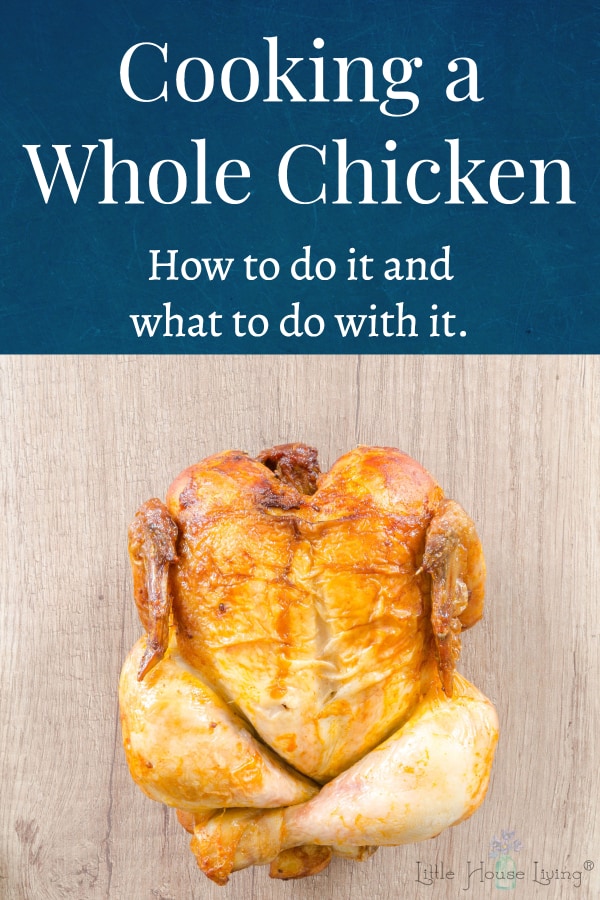 How to Cook a Whole Chicken

Chicken breast, thighs, and other cuts can get expensive. In fact, it’s often on my do-not-buy-because-we-can-not-afford list right now. Even on sale it still runs high. So instead of buying chicken breast for meals, I buy the “cheap chicken”. Cheaper cuts like wings, drumsticks, and even whole chickens are usually much less expensive.

My buying price for whole chickens is anything less than $1.49 a pound and I will usually buy other cuts of chicken for under $1.99 a pound as long as the chicken hasn’t been given hormones/antibiotics. When I can find it for my buy price or less, I like to buy a bunch and just stick it right in the freezer when I get home.

Now, you could cut up the whole chicken if you like to use to individual cuts for various meals. But I find that too time-consuming. Here’s what I like to do instead. 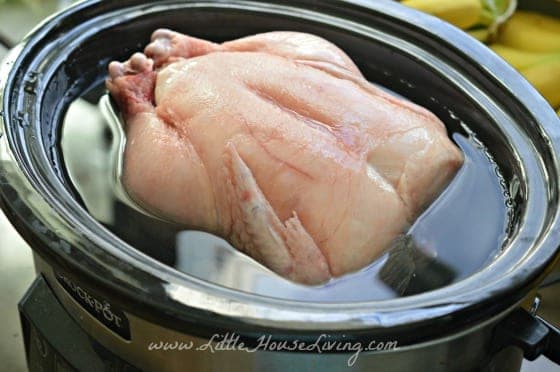 I take the whole chicken out of the freezer. Then I stick the entire thing in the crockpot. I cover it all the way with water and turn the crockpot on high. The chicken will cook in the crockpot most of the day until it’s falling apart. I like to put my chicken in the slow cooker early in the morning and I do not take it out until at least suppertime or about 10 hours later.

When I’m ready to do something with the chicken, I use large spoons to lift it out of the slow cooker and place it in a bowl to cool slightly. Then I use a fork to clean all the chicken meat off the bones. 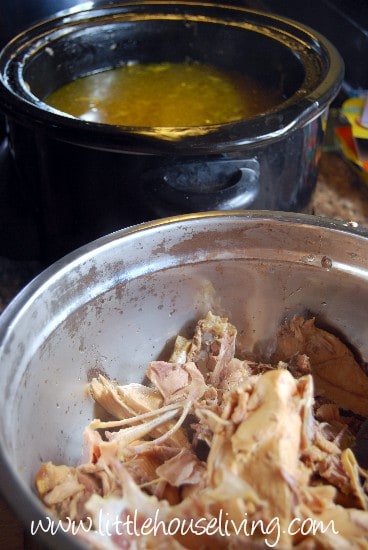 Some of the chicken I put in a container and stick in the fridge for a meal tomorrow, or I use it for supper tonight. Otherwise, I stick it in a freezer bag and put it in the freezer for future meals.

Now it’s time to work on the broth. Once I’ve turned the crockpot off and removed the chicken, I like to let the broth cool for about an hour before I place it in jars. Otherwise, there is a much greater chance I will splash hot broth on myself or the jars will break.

If you are feeling really ambitious, you can use the broth and the meat to Can Chicken. This way you get a shelf stable product that you can easily pull out for future meals. You can also Can Chicken Broth if you’d rather use the meat separately.

But what I normally do after the broth has cooled a bit, is to simply use my canning funnel and ladle to put the broth in jars and stick it in the freezer. If you do this, you must do 2 things before placing the jars in the freezer.

If you don’t do these things, your jars can and will break in the freezer.

Usually, one whole chicken will yield us about 3 quarts of chicken broth. Perfect for soups like Chicken and Rice or so many other meals and dishes such as Chicken Broth Gravy!

IF you don’t want to place your chicken broth in jars OR if you normally only use small amounts of broth at a time, you might want to look into making these Chicken Broth Cubes. They are so handy!

Another thing you can do if you’re feeling very ambitious is to Dehydrate Chicken Broth. 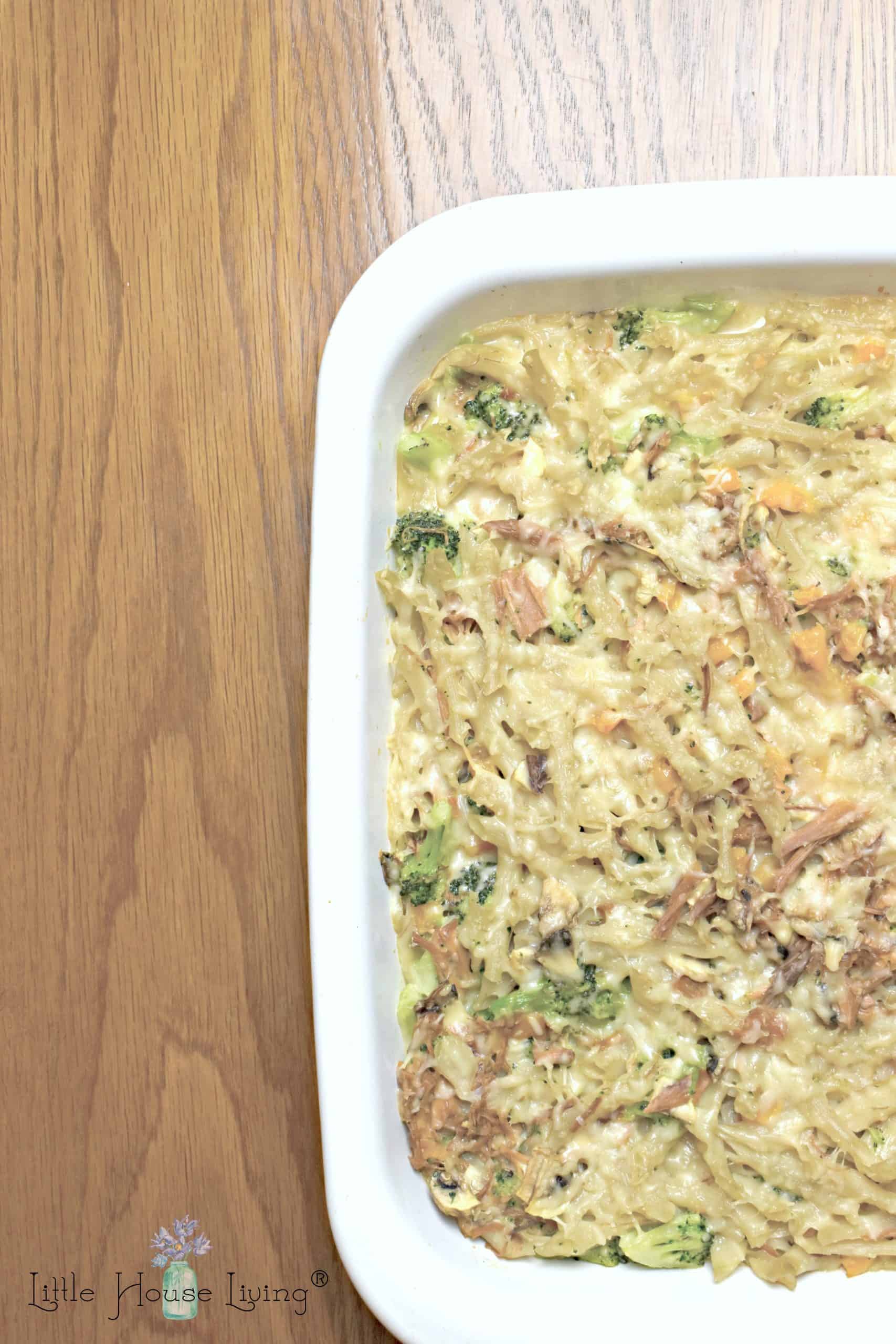 This method of cooking and using a whole chicken so easy because I can just stick it in the crockpot and not think about it all day, then I get so many meals from that one round of cooking. When you use chicken in this form it’s juicy and fresh more so than if you would cook it in boiling water or in the oven. So you can buy the cheap chicken without feeling like you are missing out. Plus it’s easy for a busy life!

Here are some recipes that you can make using these various parts of the whole chicken including the shredded meat or the broth:

Do you buy “cheap whole chicken” or do you splurge for chicken breasts? Is this the same method you use to cook a whole chicken?

This blog post about How to Cook a Whole Chicken was originally published on Little House Living in December 2010. It has been updated as of April 2019.

Welcome to Little House Living! My name is Merissa and it’s nice to meet you! I’m a wife, mom, and missionary just trying to make the most of what our family has. If you are looking for real life and not perfection, this site is for you! I love to write about frugal and simple living.
I’m glad you’ve found your way here!
Want to keep in touch?
Contact me
Sign up for my Newsletters.